The country’s largest stainless steel maker Jindal Steel (Hisar) (JSHL) today marked its foray into the Defence sector by forging a pact with DRDO for transfer of technology relating to high-nitrogen steel for armour applications. 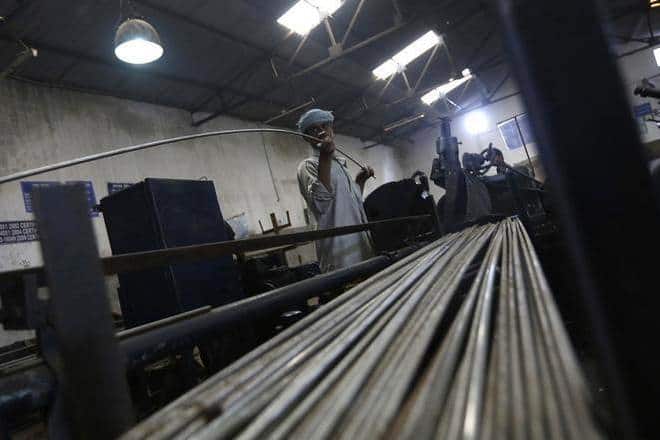 "The use of high-nitrogen steel will replace the existing import of rolled homogeneous armour (RHA), resulting in improved cost efficiency in material acquisition for armour applications by 50 per cent," JSHL said after the pact was signed. (Reuters)

The country’s largest stainless steel maker Jindal Stainless (Hisar) Ltd (JSHL) today marked its foray into the Defence sector by forging a pact with DRDO for transfer of technology relating to high-nitrogen steel for armour applications. “The use of high-nitrogen steel will replace the existing import of rolled homogeneous armour (RHA), resulting in improved cost efficiency in material acquisition for armour applications by 50 per cent,” JSHL said after the pact was signed in the presence of Minister of State for Defence Subhash Bhamre today.

Addressing the event, Bhamre said it is a breakthrough technology for armour applications and boosts indigenous technologies, in line with the Prime Minister Narendra Modi’s ‘Make in India’ vision.

Terming it as a “comprehensive” joint effort, JSHL said it took almost a decade of R&D by JSHL and Defence Metallurgical Research Laboratory (DMRL) to develop high-nitrogen steel (HNS).

“This will usher in self-reliance and global leadership in Defence,” Bhamre said, urging the industry to explore further upgradation of technology.

JSHL said it forayed into the Defence sector by “signing the licence agreement with the Defence Research and Development Organisation (DRDO), Ministry of Defence, which entails transfer of technology for manufacturing HNS for armour applications”.

With this, JSHL claims to be India’s first company to commercially manufacture HNS for the Defence sector.

The company said this development will not just accelerate the indigenisation process of the Indian Defence arsenal in line with ‘Make in India’, but help in easy availability of best material to manufacture lighter armoured vehicles as import procurement often delays the manufacturing process.

HNS is corrosion resistant and provides exceptional ballistic and blast protection than the existing material at a much reduced thickness along with longevity which increases the fuel and mass efficiency.

The company said it is also working to produce additional variants of HNS with enhanced blast and ballistic protection to cater to niche requirements of the Defence sector.

Abhyuday Jindal, Vice-Chairman, JSHL, said, “We believe HNS will immensely benefit the Indian Defence sector, going forward. The hard work and perseverance of 10 years of JSHL with the Ministry of Defence have culminated in a fantastic result for the country in line with the Prime Minister’s vision of Make in India. This development reaffirms our endeavour to achieve higher benchmarks.”

JSHL “looks forward” to collaborate with the Ministry of Defence to achieve greater efficacy of Indian armed forces and “take forward our capabilities”.

HNS is manufactured at JSHL’s state-of-the-art facility at Hisar with triplex refining route and the manufacturing process has already been optimised for industry scale production to cater to stringent and niche requirements of Indian Defence and paramilitary forces.

JSHL and DMRL together have developed the Quality Assurance Plan for the high nitrogen steel to ensure consistent quality in production to meet the future demand of HNS.

JSHL is India’s first stainless steel manufacturing unit and has operations integrated — both backward and forward — starting from melting, casting, hot rolling to cold rolling and other value additions.

The company has a melting capacity of 8 lakh tonne per annum — one of the largest in India. It is also the world’s largest producers of Stainless Steel strips for razor blades and India’s largest producer of coin blanks, catering to the needs of Indian and international mints.