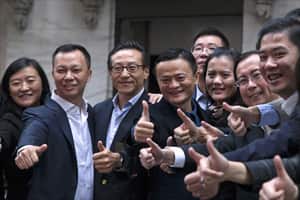 Looking to provide a platform to millions of small businesses globally, Alibaba’s founder Jack Ma wants his e-commerce company to surpass brick-and-mortar retail giant Walmart in sales in next 10 years.

“I’ve been thinking how we can make Alibaba a global platform for small businesses around the world,” Ma said.

“My vision is, if we can help a small business in Norway sell things to Argentina, and Argentina consumers can buy things online from Switzerland, we can build up an e-WTO. WTO is great but last century,” he added.

Ma said he would like to see “Alibaba exceeding Walmart in sales in 10 years time”.

According to the Alibaba Group founder, as many as 300 million people were currently transacting through its web portals and about a third of them chalking up 60 million transactions daily, with 10 million small businesses, mostly within China.

He also noted that youngsters in China unlike him “do not have the benefit of inherited wealth”.

Explained why early rejections in his life only strengthened his resolve to succeed, Ma said: “I went to KFC; 24 people went for the interview, 23 got accepted. I was the only one rejected,”he said.

He also informed the participants at the forum that after being snubbed by Harvard University 10 times, he told himself that “some day I will go there to teach”.

Moreover, Ma said that he took great inspiration from Hollywood movies in particular, the character of Forrest Gump.

“I love Forrest Gump…a simple guy – [but he] never gives up,” Ma said.