The first phase of the much anticipated multi-crore Metro Rail chugged into the city today, with Chief Minister J Jayalalithaa flagging off the inaugural service steered by a woman driver. 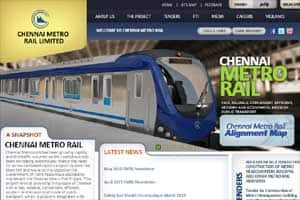 The first phase of the much anticipated multi-crore Metro Rail chugged into the city, with Chief Minister J Jayalalithaa flagging off the inaugural service steered by a woman driver.

Jayalalithaa launched the services on the Alandur-Koyambedu sector by flagging it off from the state secretariat through live video, throwing open to the public a mass rapid transport system.

The route dedicated to the public is an elevated structure covering a distance of 10.15 km, consisting of Alandur, Ekkathuthangal, Ashok Nagar, Vadapalani, Arumbakkam and Koyambedu Railway stations besides the yard at the last stop, a state government release here said.

The route of the train has been mainly on the busy 100 ft road and would cater to lakhs of commuters when fully completed.

The 45 km Metro Rail project is estimated to cost Rs 14,600 crore and would cover two routes– the 23.085 km Wannarapet to Airport section– and the 21.961 km stretch from Chennai Central to St.Thomas Mount.

According to sources, the minimum fare for the metro service may be Rs. 10 and the maximum Rs. 40 for this 10 kilometre journey with the ride expected to take less than 20 minutes.

Initially, there will be 9 trains running between Koyambedu and Alandur with a frequency of about 10 minutes, officials said.

The trains will halt for 30 seconds in each station. Each Chennai Metro Rail train can carry around 1,200 people with a seating capacity for 200 and standing 1,000.

The rest 59.22 percent has been sourced as loan from Japan International Cooperation Agency (JICA), the release said.