Iran nuclear deal means more oil, but not in 2015

A framework accord to curb Iran’s nuclear program forged on Thursday could eventually allow Tehran to reclaim lost ground in the global oil market. 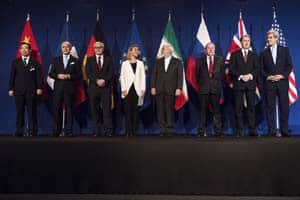 A framework accord to curb Iran’s nuclear program forged on Thursday could eventually allow Tehran to reclaim lost ground in the global oil market. Yet the deal all but guarantees that cannot happen before next year.

By ensuring that sanctions remain intact until Western powers are satisfied Tehran is adhering to the terms, and giving negotiators until June 30 to hammer out a comprehensive agreement, the deal offers little chance for any significant increase in exports until 2016.

While global Brent oil prices tumbled as much as 5 percent on Thursday to $54 in anticipation of a deal that could allow Iran to begin selling more crude within months, traders later began weighing the timing of that return. Brent traded at more than $55 a barrel by day’s end.

Verifying compliance by Iran, once the world’s fifth-largest oil producer, will “likely take many months after implementation, which itself is likely to slip from the June 30 target,” said Bob McNally, president of energy research group Rapidan Group and a former adviser to President George W. Bush.

Jason Bordoff, founding director at Columbia University’s Center on Global Energy Policy and former adviser to President Barack Obama, agreed: “It is going to take time for Iranian oil to come back to the global market, likely not until 2016 at the earliest.”

The delayed impact may be quietly welcome news for Saudi Arabia, Iraq and others in the Organization of the Petroleum Exporting Countries (OPEC), who had feared that a rapid rebound in Iranian output could pile more pressure on oil prices that have halved since last summer due to a global glut.

However it may also make for a tricky summer. OPEC is due to meet on June 5, the first gathering since it decided in November to maintain production despite tumbling prices.

In the meantime, global demand has been rising more quickly than expected and US shale oil production growth is rapidly slowing, adding to the market’s uncertainty.

“This preliminary deal will be hanging over … the oil market through the rest of this quarter,” said oil analyst Jim Ritterbusch.

SANCTIONS MAY ‘SNAP BACK’
US and EU sanctions, which have choked off nearly 1.5 million barrels per day (bpd) of Iranian exports since early 2012, will only be suspended after the International Atomic Energy Agency has “verified that Iran has taken all of its key nuclear-related steps,” according to a statement outlining the plan of action issued by Iran and world powers in Switzerland.

“If at any time Iran fails to fulfill its commitments, these sanctions will snap back into place.”

Most market experts had said they were betting on an increase of 200,000 to 600,000 bpd in Iran’s exports within six months of easing sanctions. Tim Boersma, acting director of the Energy Security and Climate Initiative at Brookings Institution, said Iran might even manage 500,000 bpd within 90 days.

Yet a full recovery in output was seen as unlikely until the second half of 2016 as new investment would be needed to rejuvenate fields. Even that may now be optimistic.

“Sanctions relief is unlikely to begin for at least six months to a year even after a deal is signed in June,” analysts at Energy Aspects said in a note on Thursday.

It is unclear whether any potential buyers might move early to step up purchases, betting that Washington and European powers will be unlikely to punish them for a breach of sanctions that are about to be phased out.

Even before the deal, Iran was set to export another 300,000 bpd in coming months, much of it to India, according to Michael Cohen, head of energy commodities research at Barclays.

Yet the risk of political repercussions from Washington and limited access to tanker insurance due to tough European restrictions are likely to prevent refiners such as PetroChina  and Hindustan Petroleum Corp. – who have said they are eager to buy more crude from Iran – from moving early.

Beyond this year, however, the breakthrough could turn Tehran’s recent role in the global oil market on its head.

For most of the past three years, crushing sanctions acted as a prop for oil prices hovering near $100 a barrel.

“While it will take a while for Iranian crude exports to recover – even if they fully comply with the terms of the deal – today’s announcement further limits the upside price risk in today’s oversupplied global oil market,” said Trevor Houser, a partner with the Rhodium Group.