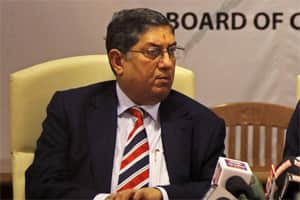 The Supreme Court on Thursday said that N Srinivasan’s conflict of interest in BCCI was “obvious” as he also owned a team, Chennai Super Kings in the IPL that would want to win the tournament.

The court said that Chennai Super Kings team should be ‘terminated without any further enquiry’.

The court also questioned BCCI if it was willing to take action against all the persons after the Mudgal probe panel report was out following detailed investigation regarding roles of Srinivasan, his son-in-law Gurunath Meiyappan  and others.

SC did not stop there, bench said it wants fresh elections in BCCI and that these can be held but persons named in Mudgal report cannot contest and new board will take decision on IPL-6 scam.

It said that the BCCI must act on its own now and consider taking all possible actions that included suspension of teams, expulsion of players and other forms of penalty.

Supreme Court asks N Srinivasan to furnish details of shareholding of India Cements and composition of its Board members.

SC tells Srinivasan to give details about who controls Chennai Super Kings owned by India Cements.

BCCI submits that an external commission be set up to hand out punishment to persons found guilty in the Mudgal committee report.

In his reply, Srinivasan tells SC to let Meiyappan be prosecuted if he has done something wrong; he is not coming in the way at all.

SC says Meiyappan’s wife was on India Cements Board of Directors, Meiyappan may have inputs in all crucial CSK decision.

SC says method of selecting IPL team is so vague that it can be assumed Meiyappan was involved in CSK decisions.

The BCCI  counsel said he would need some time to take instructions even as the proceedings in court are on.

Supreme Court added BCCI must put an end to all controversies.

The SC comments today follow quickly on the heels of a hearing held last week that put a spanner on N Srinivasan’s bid to get reinstated as BCCI chief, when the court had said it will look into ‘conflict of interest’ issue arising from his being head of the cricket board and owning an IPL team, Chennai Super Kings, whose official is found to be involved in betting.

Observing that it is a “serious issue that can’t be wished away”, the apex court had also made it clear that it will consider the conduct of his son-in-law Gurunath Meiyappan, an official of Chennai Super Kings, while deciding his plea to get back his post from which he had to step aside in June last year in view of the IPL-6 betting and spot fixing scandal.

“Please do not go by the report that you are not involved in the betting and spot fixing and scuttling the probe. Despite all this your official is involved which will affect you,” the bench comprising justices T S Thakur and F M I Kalifulla, had told Srinivasan’s counsel Kapil Sibal who pleaded that the report has nothing against him.

“Don’t presume anything,” the bench had said, adding,”You are contesting the election by saying that you are not involved but somebody close to you is involved.”

At the outset, the bench raised questions on how Srinivasan can own a team while being President of the Board. It said “the BCCI and IPL cannot be separated and is a creature or product or byproduct of BCCI”.

“Some people who are in the BCCI now own a team. It has become a mutual benefit society. The ownership of team raises conflict of interests. President of BCCI has to run the show but you have a team which raises questions and it can’t be wished away,” it had said.

Expressing serious concern over cricket being bowled by betting and spot fixing scandal in IPL 6, the bench said “cricket is a religion in the country and the purest form of the game must be restored”.

“If you are allowing these things to happen, you are killing the game and no body will enter the stadium. If the people come to know that matches are fixed then nobody would come to watch the game. Will the people enter the stadium knowing that it is a farce,” the bench said.
Cricket has to be played in the true spirit of the game and it should remain a gentleman’s game, it had stressed.

The bench said there was no option for the BCCI but to take action on the basis of the Justice Mukul Mudgal Committee report which found aberrations in the IPL-6.

“Can you afford to do that. You have to make sure that the game is played in its purest form and its reputation has to be protected. The benefit of doubt should go in favour of game and not in favour of individuals,” it had said.

“Your duty is to organise a show and keep away all the things which are happening. As a President what is your duty. All teams should have a level-playing team and nothing of this sort should happen. The purest form of game is to be played. You have to be above suspicion,” it had said.