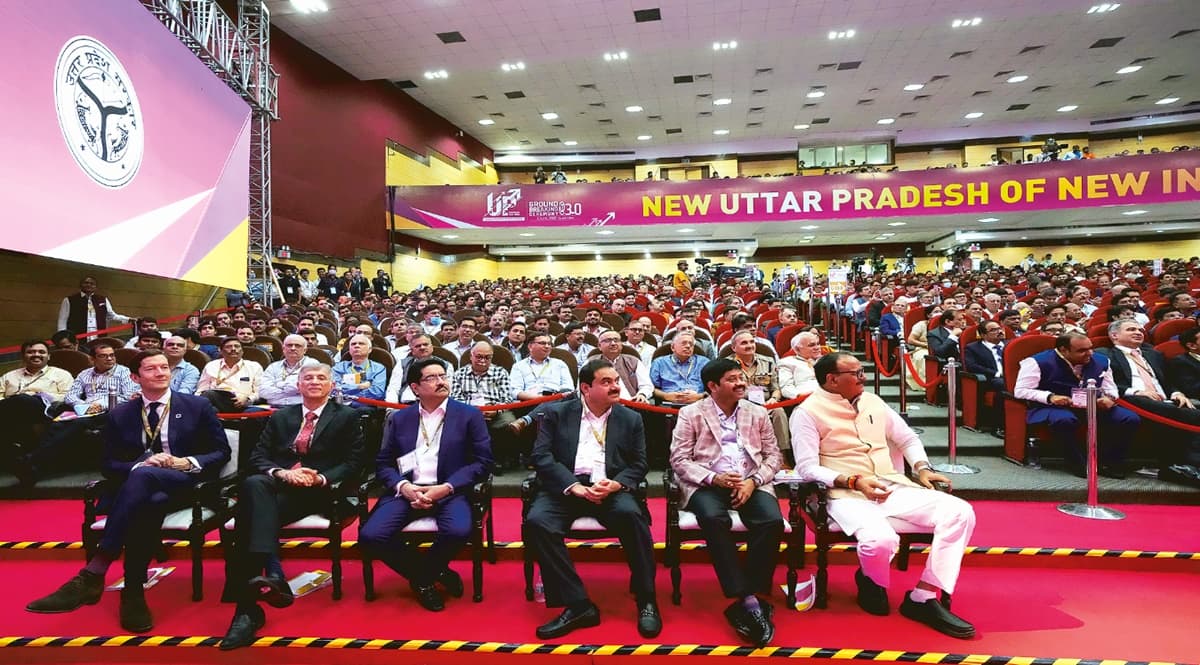 (From left) Industry leaders Niranjan Hiranandani, Kumar Mangalam Birla and Gautam Adani sit with Uttar Pradesh ministers at the ground breaking ceremony of the UP Investors Summit in Lucknow on Friday (AP photo)

Leading industrialist Gautam Adani on Friday committed an investment of Rs 70,000 crore in Uttar Pradesh at the third edition of the UP Investors Summit in Lucknow. Speaking at the event, the billionaire investor said this investment will create 30,000 jobs in India’s most populous state. Out of this investment, Rs 11,000 crore has already been spent on projects like transmission and green energy.

“We are investing over Rs 70,000 crore in the state. We anticipate that this investment will create over 30,000 jobs,” Adani said. The group is also investing Rs 24,000 crore on road & transport infrastructure and Rs 35,000 35,000 crore on multi-modal logistics and defence sector.

Besides, it is in the process of the setting up South Asia’s largest ammunition complex in Kanpur. Ashish Rajvanshi, president & CEO of Adani Defence & Aerospace, said, “The ammunition complex will have state-of-the-art technology across small and medium calibre ammunition, along with short-range air defence missiles. It shall be a key facilitator in India’s goal of achieving $5.0 billion exports in defence manufacturing.”

Speaking on the eve of the signing of the MoU, Awanish Kumar Awasthi, CEO, UP Expressways & Industrial Development Authority (UPEIDA) and additional chief secretary, said this project is going to prove to be a landmark in the history of indigenous defence manufacturing.

Other prominent industrialists, including Kumar Mangalam Birla, Sajjan Jindal, and Mukesh Ambani’s son Anant, are likely to attend the event, officials aid.
Earlier in the day, Prime Minister Narendra Modi attended the ground breaking ceremony of the summit, during which he laid the foundation stone for 1,406 projects worth more than Rs 80,000 crore.

“I believe that it is Uttar Pradesh that will give momentum to India’s growth story in the 21st century. In the next 10 years, Uttar Pradesh will be a big driving force for India,” Modi said. According to an official statement, the investment in the Friday’s ceremony will fund at least 805 projects in the micro, small, and medium enterprise sector, 275 in agriculture and allied industries, and 65 in pharmaceuticals and medical supplies.