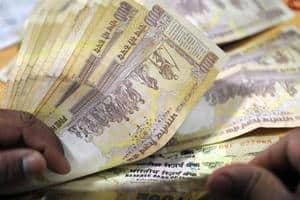 Official sources said taxmen conducted raids against the lawyer, based in a posh south Delhi locality, few days back based on some "actionable" inputs about alleged tax evasion by him and his business entities. (AP)

Benign prices of commodities and some traction in volumes are helping India Inc post better numbers this earnings season, reports fe Bureau in Mumbai. Profits, for a clutch of 686 companies (excluding banks and financials, Cairn and Vedanta), in the three months to March, have risen 27% year-on-year, thanks to a near 400 basis points drop in the share of raw materials to sales and virtually no increase in interest costs.

The 4.7% rise in revenues, while seemingly subdued, must be seen against the backdrop of a disinflationary environment. However, it’s a fact that companies have lost pricing power — Hindustan Unilever and Asian Paints have taken price cuts to ensure they are able to retain market share — though volumes are beginning to rise for some sectors. Ultratech Cement for instance, reported a volume increase of  a smart 15% year-on-year.

Most heavyweights have surprised the street but the good news is that both large and small companies seem to be doing well,   especially in the consumer good space.At Marico too volumes were strong at 10.5% y-o-y, the highest in the last 14 quarters while at Dabur they were up 7%.  Smaller engineering firms such as Voltas  beat estimates thanks to  better inflows in the projects division and good execution which helped drive up margins. The firm’s consumer business also fared well with AC sales up 10% year-on-year.

However, a full recovery could be some time away. At Siemens, margins rose 160 basis points y-o-y to 11% driving up profits by  9% y-o-y; more important, order inflows rose 10% y-o-y although they fell sequentially and consequently the orderbook at the end of the March quarter was at levels seen in 2009. The management observed it was seeing a pick-up in capex by government but not yet from the private sector.