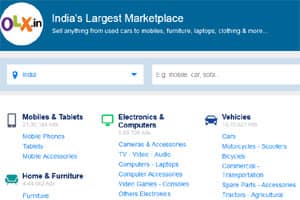 Online classifieds platform OLX today said it expects traffic on its website to grow at a strong pace, driven by increasing penetration of smartphones in the country.

India, which already accounts for the highest number of listings, had about 1.5 billion monthly page views generated from the country.

The Naspers-backed firm generated more than 11 billion monthly page views. It is present in over 106 countries in 40 languages.

“Mobile users have fueled a significant portion of OLX’s growth, particularly in major emerging markets like Brazil and India. In India, we have a consumer-to-consumer (C2C) marketplace, which has worked well for us. India has the highest number of listings compared to other markets where we are present,” OLX India CEO Amarjit Batra told PTI.

OLX.in’s traffic has grown 150 times in the last 3.5 years, when its first television ad was released.

“With 80 per cent of our traffic now coming from mobile, we are on the verge of becoming a mobile-only company. A major chunk is coming from used mobile and electronics, household goods, cars and bikes,” Batra said.

OLX is available in more than 40 countries and over 50 languages. It connects local people to buy, sell or exchange used goods and services.