In war with Ratan Tata, Cyrus Mistry gets breather at Tata Power, but fate hangs in balance

While ousted Tata Sons chairman Cyrus Mistry may have won a temporary reprieve on Tuesday with the board of Tata Power not passing a resolution to remove him as chairman, the board nevertheless decided to convene an… 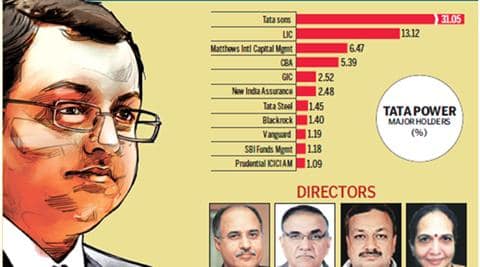 Tata Power’s board comprises 12 members, including chairman Mistry and managing director Anil Sardana. Of these, seven are independent directors.

While ousted Tata Sons chairman Cyrus Mistry may have won a temporary reprieve on Tuesday with the board of Tata Power not passing a resolution to remove him as chairman, the board nevertheless decided to convene an extraordinary general meeting (EGM) to consider removing him as director. Sources close to Mistry said that he chaired the meeting which also took into account the company’s July-September earnings with nobody contesting it.

Tata Power’s board comprises 12 members, including chairman Mistry and managing director Anil Sardana. Of these, seven are independent directors. The number of Tata Group companies that have convened an EGM to remove Mistry as director has now gone up to six. Earlier, Tata Steel, Tata Motors, Tata Consultancy Services (TCS), Tata Chemicals and Indian Hotels Company (IHCL) announced the dates (all in December) for their respective EGMs to remove Mistry as director from their respective boards. Three of the boards, that of TCS, Tata Global Beverages and Tata Steel, have already replaced him as chairman.

Between December 13 and December 26, TCS, IHCL, Tata Steel, Tata Motors, Tata Chemicals and Tata Power will hold their respective EGMs to consider Mistry’s removal as director from their boards. Of these, the boards of Tata Steel, Tata Motors and Tata Chemicals also have Nusli Wadia as an independent director and his removal is also on the agenda.

Tata Power’s board meet on Tuesday followed that of Tata Steel, which was held on November 25 and in which Mistry was unceremoniously removed as chairman with the board, replacing him with former State Bank of India chairman OP Bhatt, an independent director on the company’s board. Bhatt will remain as Tata Steel’s interim chairman till the completion of the EGM. Wadia had shot off defamation notices to Tata Sons in response to the notices removing him as an independent director from these companies. He received a reply from Tata Sons saying it does not need to provide reasons for seeking his removal from the respective boards.

The unseemly corporate fight between Tatas and Mistry began on October 24 when Mistry was unceremoniously removed as the chairman of Tata Sons on charges of under-performance and not having kept in mind the ethos of the Tata Group. Since then both sides have made allegations and counter-allegations. Mistry for his part has defended his strategies and blamed the legacy issues for the large debt overhang on the group. He has also found support from the independent directors of Tata Chemicals and Tata Motors, calling his ouster an “illegality”.

His fate on the boards of the Tata Group companies, however, remains in the hands of institutional shareholders, who have large stakes in several of them. Life Insurance Corporation of India, for instance, has a 13.9% and 13.1% voting right in Tata Steel and Tata Power, respectively.