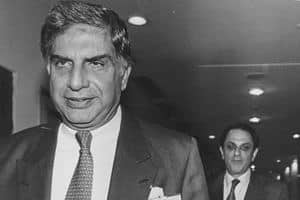 Ratan Tata and Nusli Wadia at a meeting of industrialists in New Delhi on October 14, 1997. (Express photo archive )

A long-time friend and ally of the Tata Group, Nusli Neville Wadia on Friday paid the price for supporting Cyrus Mistry, son of Shapoorji Pallonji Mistry, who was removed as chairman of Tata Sons on October 24.

Tata Sons has asked Tata Steel, Tata Motors and Tata Chemicals to call for extraordinary general meetings (EGMs) to remove Wadia from the boards of these companies.

Wadia is an independent director on these boards and had on Thursday expressed his confidence in Mistry along with other independent directors of Tata Chemicals. The Tata Group has viewed Wadia’s support for Mistry as a betrayal of sorts, persons close to the group said.

In the late 1990s, when Tata Tea (now Tata Global Beverages) was being investigated by the government for paying off ULFA extremists in Assam, as the famous “Tata tapes” — made public by The Indian Express — revealed, it was Wadia and not Ratan Tata who was negotiating a settlement with the government.

Meanwhile, Tata Sons pursued moves to remove Mistry from the boards of Tata Group companies, having dismissed him as chairman of Tata Consultancy Services (TCS) on Thursday without even calling a board meeting; old-time Tata hand Ishaat Hussain was appointed in his place.

On Friday, Tata Steel, Tata Motors and Tata Chemicals were asked to call EGMs; on Thursday, Indian Hotels Company (IHCL) had been asked to do so.

Mistry has found support from independent directors at Tata Chemicals and IHCL, who have applauded his efforts and praised his performance. On Friday, three independent directors of Tata Steel too — including Wadia — are believed to have spoken up in Mistry’s support. However, three others — Mallika Srinivasan, OP Bhatt and Andrew Robb — are understood to have asked Wadia to drop a pro-Mistry resolution, pointing out that the company was meant for all stakeholders and not just a single individual. They believed it would not be in the interest of the company to confront the promoters.

Corporate and legal experts opine that while Mistry may have done a good job, given he inherited a group that was not in good financial shape, financial institutions and other large non-promoter shareholders were likely to vote with the Tatas. One reason for this, they pointed out, was that some of the companies — Tata Steel, for instance — are highly indebted and might require capital infusions that can only come from Tata Sons. With Mistry at the helm, Tata Sons might be unwilling to contribute to the capital of these over-leveraged companies, they observed.

Given that the Tata Group has a stake of 31.35% in Tata Steel, 32.43% in Tata Motors and 30.8 % in Tata Chemicals, Mistry will need the support of financial institutions if he is to survive. Life Insurance Corporation of India, for instance, has a near-14% stake in Tata Steel and 5.2% in Tata Motors. Ratan Tata has already called on the top brass at the life insurer. Again, ICICI Prudential Life Insurance and ICICI Prudential AMC together have a 9.85% stake in Tata Chemicals. Reliance Capital Trustee has a 5.5% stake in IHCL while HDFC Mutual Fund holds 4.65% in Tata Steel.

On October 24, Mistry was dismissed as chairman of Tata Sons and Ratan Tata took over as interim chairman for a period of four months till a successor was found. Since then Tata Sons has charged Mistry with not working in keeping with the culture and ethos of the Tata group and under-performing. Mistry has responded saying he was not given a free hand to function and that alternative power centres had been created. In an insight into the functioning of Tata Sons, Mistry cited the instance of how once trustee directors Nitin Nohria and Vijay Singh had to leave a a board meeting in progress for almost an hour, keeping the rest of the board waiting, “in order to obtain instructions from Mr Tata”. “I had to ease out hangers-on prone to flaunting their proximity to power,” Mistry wrote to the Tata Sons board in an email.

In detailed replies to allegations by Tata Sons of the financial performance of group companies not having been up to the mark, Mistry has pointed out that several of the companies were in bad financial shape when he took over. The former Tata Sons chairman said the capital employed in legacy hotspots — IHCL Tata Motors’ passenger vehicle unit, Tata Steel Europe, Tata Power Mundra and Tata Teleservices — has risen from R1,32,000 crore to R1,96, 000 crore due to operational losses, interest and capex. A realistic assessment of the fair value of these businesses could potentially result in a write down over time of about R1,18,000 crore, he wrote.

Tata Sons has complained that its dividend income from group companies fell from R1,000 crore in FY13 to R780 crore in FY16 — if TCS was excluded. An FE analysis found the dividend income of Tata Sons had seen only a minor fall under Mistry’s watch, despite the economic slowdown both overseas and at home, largely on account of Tata Motors. Of the top 10 dividend- paying firms, nine paid higher dividends in FY16 than in FY13.