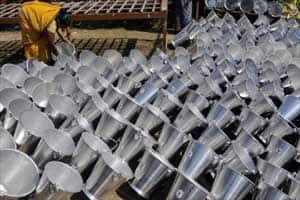 Hindalco share price surged over 10 per cent in early trade on Monday after its standalone net profit more than doubled to Rs 356 crore for the quarter ended March 2016 helped by growth in sales of value-added products as well as cost efficiencies. (Photo: Reuters)

The company had reported a standalone net profit of Rs 359 crore in the corresponding quarter of last fiscal, the company said in a regulatory filing.

Its total income from operations declined to Rs 8,150.27 crore during the quarter under review from Rs Rs 8,603.03 crore in the year-ago period.

“Operating results for the quarter were severely impacted by the sharp drop in London Metal Exchange prices and regional aluminium premium, the macro economic factors beyond the company’s control. As a result, combined decline in realisations, on YoY basis was over $ 700 per tonne of aluminium,” the company said in a statement.

“However, strong operating performance on the back of ramp up of new age smelters, partly aided by softer input prices helped us in partly mitigating the realisation pressure. The Mahan smelter is now operating at full capacity and the Aditya smelter is well on course of full ramp up,” it added.

It said revenues for the quarter were down by 5 per cent due to a sharp decline in aluminium and copper realisations. However, a strong increase in aluminium volumes and thrust on value addition partially offset the impact of severe fall in realisations.

The company said in line with its long-term strategy with regard to its coal mix, the first of the four coal blocks won in the auction – Gare Palma IV/4 has started producing coal towards the quarter.

It said depreciation and finance costs were higher by 227 crore over that of Rs 663 crore reported in the 2014-15 quarter given the “progressive capitalisation of greenfield projects.

“During the quater alumina production at 705 kilo tonnes (KT) was 19 per cent higher as compared with Q3 FY15,” Hindalco said and added, “aluminium metal production stood at 296 KT and was up 35 per cent on YoY basis.”

The copper segment continued to deliver a solid performance with steady cathode production at 94 KT while fertiliser production jumped 9 per cent to 89 KT.

“With macro economic headwinds continuing, even as the company faces challenging times it continues with its unrelented focus on operational excellence, enhanced value addition and cash conservation,” it said.

Shares of the company closed at Rs 69.95 apiece on the BSE, up 0.36 per cent from the previous close.