Two Air India aircraft, including a Boeing-787 Dreamliner, were grounded after their engines were hit by an aerobridge and a container… 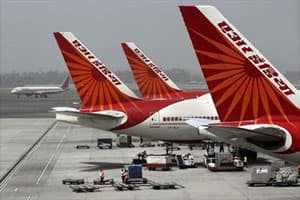 Two Air India aircraft, including a Boeing-787 Dreamliner, were grounded after their engines were hit by an aerobridge and a container, both pushed by strong winds, at the IGI airport here.

Engines of the aircraft have been damaged and both have been grounded, they said.

In the case of B-787 Dreamliner, its left hand engine was hit by jetty (aerobridge) and the nose cowl was damaged, while the thrust reverser of the Boeing-777’s right hand was damaged after being hit by a container which hit it from behind, the sources said.

At the time of the incident, wind speed went up to 48 knots whereas the forecast was of only about 20 knots, DGCA (Directorate General of Civil Aviation) sources said.

At 1109 hours, Delhi airport’s AOCC (Airport Operation Control Centre) had put out a weather update saying that thunder storm with rain was likely from 1200 to 1500 hours with wind speed touching about 20 knots, they added.