Mirach has said it can still go ahead with $2.05 bn loan arrangement for Sahara, which needs funds to secure release of Subrata Roy from Tihar Jail. 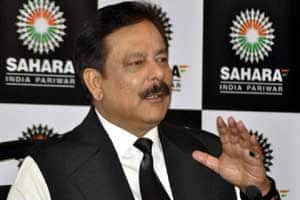 Sahara India Pariwar (family) had become one of India's most successful companies over the past three decades with this kind of financial alchemy, turning tiny deposits into dreams for small farmers, rickshaw pullers and food vendors with little financial knowledge. (PTI)

In a fresh twist to the alleged “forgery” saga, US-based Mirach today asked Sahara to make a “formal apology” for tarnishing its image, failing which it warned of legal action and demanded over USD 13 million in compensation for breach of contract.

The compensation would be in addition to USD 2.6 million already given by Saharas for meeting due diligence and related costs, Mirach Capital CEO Saransh Sharma said in a letter addressed to Sahara chief Subrata Roy.

Sharma also offered that Mirach can still go ahead with the USD 2.05 billion syndicate loan arrangement for Sahara, which needs funds to secure release of Roy from Tihar Jail, where he has been lodged for almost a year.

Mirach, which released the letter to media as well, gave another option of complete buyout of Sahara’s three overseas properties. As a third option, it has offered to return USD 2.6 million given to it by Sahara if the Indian group tenders a formal apology and retracts its allegations.

There were no immediate comments from Sahara on this letter.

Sharma said Mirach had offered to return this money (USD 2.6 million) seven days ago, but Sahara had insisted that Mirach keep it to cover expenses.

“…however, given the recent public events, if all funds are returned then we will need a public retraction of the false allegations you have made against Mirach.

“Should Sahara not retract these false public allegations then Mirach will have to utilize the remainder of the Due Diligence budget to retain legal council to pursue breach of contract charges among others and demand its compensation that Mirach would have earned from the imminent closing of this transaction, which would have been in excess of USD 13 million,” he added.

Sharma further said: “We both know that the question of Mirach forging a letter cannot arise as the letter was sent directly from the bank to Sahara’s attorneys.

“I am willing to work with any three of the solutions proposed above, however, I will not allow you to target and destroy my career when all I intended to do was structure a solution that benefitted every party involved.”

Mirach further said that “given the allegations and false statements that Sahara India Pariwar has released publicly against Mirach, which we both know are not accurate, it is with utmost displeasure that I write this letter to you today.

“Mirach approached Sahara India Pariwar to help resolve a situation that we felt was in mutual benefit for Sahara, SEBI, Bank of China, the creditors and Mirach.

“It is rather unfortunate that despite providing you with a loan package that we were ready, willing and able to close by the February 20th 2015 deadline, you have failed to perform once again.”

In its first offer, Mirach said it “can still proceed with the loan structure that we have already executed and drafted paperwork for. However, in order to proceed with this, Mirach will require that Sahara publicly retract its statement with a formal apology for the tarnishment that has been caused on Mirach’s reputation and its business associates and members of its investor network.

“Alternatively, Mirach can proceed with the acquisition of the properties as has been consistently stated.

“Given the work that has been done over the past seven months, it would be the quickest solution that you allow us to acquire the several properties that were included in the USD 2050 million loan package instead of wasting another 4 months as you are stating publicly and to SEBI, which we both know is not true. We can have all documents redrafted in order to structure this as a sale and still meet the February 20, 2015 deadline.

“If the above two options are not acceptable to you then my only proposal is that the USD 2.6 Million that was deposited to cover due diligence costs, including Legal, Accounting and Consulting bills, be returned to Sahara in order to end business matters between us permanently.”

Mirach had said yesterday the syndicated loan package offered to Sahara was “no longer on the table”, but it offered a complete buyout of Sahara’s three iconic hotels — Plaza and Dream Downtown in New York, as also Grosvenor House in London.

Sharma, who himself is facing lawsuits in the US and in the past has reportedly admitted to stealing database of a former employer, rejected the allegations of forgery in this loan deal and accused Sahara group of repeatedly undermining the transaction, wasting the time of “its investors, Sebi and the Supreme Court”.

The purported transaction was to involve transfer of loans on Sahara’s three iconic overseas hotels — two in New York and one in London — to a syndicate of investors, for which Mirach had claimed to have initially deposited USD 1.05 billion in a Bank of America account. The financing package was to be expanded to about USD 2 billion eventually.

Sahara was looking to use part of these funds to ensure release of Roy and his two colleagues from Tihar Jail, where they have been lodged for almost a year in a case relating to repayment of investors’ money totalling over Rs 20,000 crore.

Bank of America has already said it was not at all involved in any such transaction, following which the entire financing arrangement began unravelling and resulted in allegations of “forgery” and subsequent counter-allegations.

After BofA’s disclosure, Mirach said it has “determined” a bank for the funding plan but did not name it.