Donald Trump may jeopardise US TPP with 11 nations

Donald Trump’s election as the 45th American president could deal a deadly blow to the ambitious Trans-Pacific Partnership (TPP) between the US and 11 others. 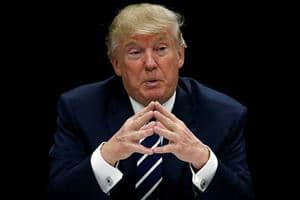 During his campaign for presidential elections, Donald Trump had continuously lashed out at China saying that Beijing will be punished with 'defensive' 45 percent tariffs on Chinese imports and officially declared a currency manipulator.(Reuters)

Donald Trump’s election as the 45th American President could deal a deadly blow to the ambitious Trans-Pacific Partnership (TPP) between the US and 11 others, and the world’s largest economy under him may turn more protectionist, given his strong criticism of the mega trade deal as well as outsourcing of jobs to countries like India during the course of the elections.

Any attempt to either delay the passage of the TPP or tweak it or scrap the deal altogether will ease some pressure on India, China and others and buy them some time to conclude the 16-nation Regional Comprehensive Economic Partnership (RCEP), initially aimed at countering the TPP. If Trump’s pre-poll rhetoric is any indication, more protectionist measures, especially in services, could be in the offing, which will hurt the Indian IT industry. Even students aspiring to study in the US may face some difficulty to get visas. Nevertheless, Trump’s tough stance on terrorism may serve to further improve co-operation between the two sides in defence and may result in greater Indo-US deals in this space, said analysts. Gains for India could be more political than economic, they added.
However, the fact that Trump hasn’t been a politician adds to the discomfit of some trade and government officials, as nobody knows him too well to predict with substantial clarity what course of action he will pursue.

In June, Trump called the TPP a “continuing rape of our country”. He went to the extent of saying: “The TPP would be the death blow for American manufacturing. It would give up all of our economic leverage to an international commission that would put the interests of foreign countries above our own. It would further open our markets to aggressive currency cheaters.” This month, Trump alleged that IBM laid off 500 workers in Minneapolis and moved jobs to India and other countries, adding a Trump administration will “stop the jobs from leaving America”. He has also criticised America’s huge trade deficit with China and some others (India enjoyed a $19-billion goods trade surplus with the US in FY16), and vowed to correct the imbalance once voted to power.
Analysts said although most of the mad pre-poll rhetoric gives way to pragmatism after the elections are over, it’s too early to predict such an eventuality this time around, given the extreme positions Trump took on issues like TPP and outsourcing.

Some IT industry officials are already jittery about the prospect of a totalisation agreement with the US to exempt the Indian IT industry from mandatory payments for social security of their Indian employees in the US.

Even a rollback of the US move to drastically hike the H-1B and L-1 visa (meant for working professinals) charges late last year, which is estimated to quadruple the Indian IT industry’s annual visa costs to $400 million, is out of question now. This means India has to really slog it out at the World Trade Organization (WTO) to force a likely more belligerant US to withdraw the hike. India is a major user of such temporary work visas for skilled professionals, making up for roughly 67% of the H1-B visas and 28% of the L-1 visas (in 2013-14).

The IT companies are paying around $1 billion a year to comply with the social security norms for their Indian employees in the US, despite the fact that these people don’t work there long enough to be eligible for such benefits. India is also gearing up to challenge the US at the dispute settlement body of the WTO on the hike in visa charges.

Abhijit Das, the head of the Centre For WTO Studies at IIFT, said: “There are speculations that current President Obama will seek to ratify the TPP in a lame-duck session. So let’s not think that TPP is already dead. But yes, it will be extremely difficult for Obama to push through the TPP now.”
The TPP between the US and 11 other Asia-Pacific nations, including Japan, Australia, Malaysia, Mexico, Singapore and Vietnam, represents roughly 40% of global gross domestic product and one-third of world trade. It’s aimed at further liberalising trade among these nations.

However, Das added that there is some silver lining in the sense in the US, ultimately pragmatic business sense prevails. In the US, a lame-duck session occurs whenever Congress meets after its successor is elected but before its term begins.

Already, Alabama senator Jeff Sessions, a key Trump aide, told New York Observer: “I think the TPP is dead, and there will be blood all over the floor if somebody tries to move that through the Congress any time soon.” However, analysts say the US, under Trump, has to strike a delicate balance between seeking to maintain its influence in the international politics and trade and keeping happy segments of its own population–especially the working class–that fear huge amount of jobs in the manufacturing sector are lost due to cheaper imports and outsourcing.

In case the US pulls out of the TPP, analysts say, it could not just bolster China’s influence in Asia but also erode US’ credibility as a nation that can walk the talk on trade. Already, Philippine President Rodrigo Duterte has shown signs of antagonism towards the US over the latter’s criticism of his controversial anti-drugs campaign. Recently, Malaysia, a TPP member, stuck deals worth $34 billion with China.

Ram Upendra Das, professor at the Research and Information System for Developing Countries, said Trump’s pre-poll rhetoric–whether it’s on the TPP or China or the Indian IT industry—seemed to have been based on the premise that America was being drained by others and that it didn’t gain anything in return. That’s too simplistic a view and far from a pragmatic analysis of international economic engagement. “However, I am more optimistic about the trajectory of the Indo-US relations in future in which, despite existing differences and challeges, both the sides will realise the value of a long-term partnership and strive towards achieving more pragmatic and positive solutions to these problems. As such, both the sides complement each other in many areas, especially in services. ”
Congratulating Trump on his victory, IT industry body Nasscom said: Many of his observations during the campaign concerning high-skilled immigration and outsourcing were based on fabrications put out by critics of the sector. Nasscom and leaders of the Indian IT industry look forward to working with him and his administration and leaders of the House and Senate to highlight our sector’s contributions to the US economy and help ensure that they understand these facts as well as the depth of our investments.”

According to a Nasscom report released in September last year, Indian IT companies were providing more than 4 lakh jobs in the US, of which around 3 lakh were held by either US citizens or permanent residents. These companies also invested over $2 billion in the 2011-2013 period and paid a staggering $22.5 billion in taxes to the US during those years.

In the infrastructure sector, both the Indian and the US businesses are expected to explore opportunities available with each other in a big way. Engineering Export Promotion Council chairman TS Bhasin said: “Trump has stated clearly that his focus would be to spend huge funds on building the US infrastructure. That would generate a great demand for engineering exports in areas like steel, machinery and high technology domains. The Indian industry would certainly look forward to be a partner in that great endeavour.” Even the US business are keen on various Indian urban development initiatives, including the Smart City mission.

India has already liberalised its foreign direct investment regime in sectors like defence, civil aviation and retail and is considering further easing of retail trade rules for e-commerce. This has helped attract more FDI from the US in recent years than earlier. US was the third -largest FDI source for India in 2015-16, improving its position from 5th in the overall ranking of countries from where FDI flowed into India between April 2000 and March 2016.
However, both the sides are unlikely to budge on areas like the intellectual property right (IPR). India has consistently maintained that its IPR policies are fully compliant with the WTO standards. Nevertheless, the US has retained India on its priority watch list in its annual Special 301 report and is seeking more commitment from India on securing the rights of patents holder, among others.