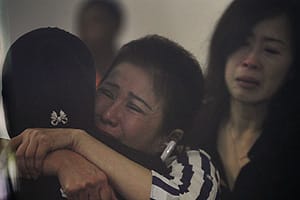 Relatives and next-of-kin of passengers on the AirAsia Flight QZ8501 comfort each other as they wait for the latest news on the search of the missing jetliner at Juanda International Airport in Surabaya. (AP)

The disappearance of an AirAsia Flight QZ8501 passenger jet soon after takeoff inevitably brings back memories of the mystery behind Malaysia Airlines Flight MH370 that is still missing after it disappeared nine months ago.

But while it is still not known what happened to AirAsia Flight QZ8501, there appear to be no reasons its presumed crash is anything other than a regular – if tragic – aviation disaster, whose cause will become apparent only when the wreckage and flight data recorders are recovered.

But until that happens, comparisons will be made of the circumstances leading up to the two events, the responses by regional authorities and airline officials, and the nature and challenges of the search efforts.

Check out the conversation on Airasia flight QZ8501 on Twitter timeline:
#QZ8501 Tweets
Here are some of the differences between the two events, based on what authorities have publicly disclosed about the plane, which lost contact with ground control in Indonesia early Sunday morning, 42 minutes after taking off from Surabaya airport on the way to Singapore with 162 people on board: --- FOUL PLAY Authorities suspect Flight 370 was deliberately diverted by someone on board, and suspicions of foul play emerged within days of its disappearance. There has been no suggestion that the AirAsia flight is anything but an accident, meaning the aircraft should have crashed not far from the spot where it fell off the radar. Indonesia's Transportation Ministry says its pilots asked permission to turn left and fly higher to avoid clouds three minutes before the jet was last seen on radar. That strengthens early speculation that adverse weather, or the pilot's response to it, was a factor in the accident. --- SOUTHERN INDIAN OCEAN Based on data ''pings'' from Flight 370, authorities believe the plane crashed into the southern Indian Ocean, a vast, deep, isolated stretch of water far from the last known position of the plane. The AirAsia flight was carrying enough fuel for about four hours of flying. Assuming it crashed soon after it dropped off the radar, finding it should be far easier. The Java Sea is a contained body of water, shallow, and crisscrossed by planes and ships. In normal circumstances, a plane leaves wreckage even if it enters the water largely intact. It can take several days for it to be spotted, however. On Jan. 1, 2007, an Indonesian jet liner carrying 102 people went missing on a domestic flight from Jakarta to Sulawesi. A search effort across land and sea turned up nothing until 11 days later when a fisherman found the plane's right horizontal stabilizer. [caption id="attachment_24124" align="alignnone" width="630"]

Relatives and next-of-kin of passengers on the AirAsia Flight QZ8501 comfort each other as they wait for the latest news on the search of the missing jetliner at Juanda International Airport in Surabaya. (AP)[/caption] Check out the Airasia flight QZ8501 announcements on Twitter timeline: #AirAsia Tweets --- AIRLINE COMMUNICATIONS Malaysia Airlines was severely criticized following the disaster for giving out contradictory and vague information. So far, that has not happened with the latest accident. The boss of AirAsia, Tony Fernandez, has tweeted about the incident and what the company is doing, drawing praise not scorn. Managing communications about the loss the flight will become more challenging if the wreckage is not found quickly. The fact that the overwhelming majority of the passengers are Indonesians and that it was an Indonesian-registered company operating the plane should mean less pressure, however. Around two-thirds of the passengers on Flight 370 were Chinese, with the rest coming from all over the world, only adding to what was already an unprecedented situation.