Flamboyant businessman Vijay Mallya will get USD 75 million (Rs 515 crore) from Diageo as part of an “agreement” for his exit from United Spirits, a company founded by his family and now run by the global liquor giant. 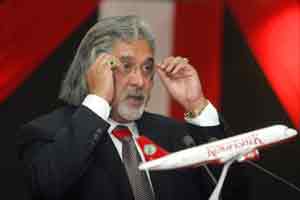 Flamboyant businessman Vijay Mallya will get USD 75 million (Rs 515 crore) from Diageo as part of an “agreement” for his exit from United Spirits, a company founded by his family and now run by the global liquor giant.

Besides, Diageo has agreed that Mallya will have no “personal liability” to the UK-based company in relation to the findings of the alleged financial irregularities at the company that had triggered an acrimonious fight between them. These allegations, which surfaced after an internal inquiry, related to the period before Diageo acquired controlling stake in United Spirits Ltd (USL) from the Mallya family.

Under the agreement, Mallya will resign as Chairman and non-executive director of USL, as also from the boards of other USL group companies.

However, his son Siddharth Mallya would remain on the board of the USL group company which holds the Royal Challengers Bangalore IPL franchise and Diageo can not “seek to remove him from that board for a period of two years”. Father will have honorary title of the team’s Chief Mentor.

Mahendra Kumar Sharma, an independent director, will be the new chairman of United Spirits.

Giving details of the agreement reached with Mallya, Diageo said it has “agreed to pay USD 75 million to Mallya in consideration for his resignation and the termination of his appointment and governance rights and his relinquishing of the rights and benefits attached to his position as Chairman and non-executive director”, among other factors.

The payment is also for “his agreement to five-year global non-compete (excluding the UK), non-interference, non-solicitation and standstill undertakings, and his agreement that he and his affiliates will not pursue any claims against Diageo, USL and their affiliates”.

Diageo said it will pay USD 40 million of this amount immediately with the balance being payable in equal instalments over five years.

Separately, Diageo has agreed that Mallya will have no personal liability to Diageo in relation to the findings of the inquiry by USL (announced on 25 April 2015) into certain matters referred to in its financial statements and the qualified auditor’s report for the financial year ended 31 March 2014, and its prior agreement with Mallya regarding his position at USL.

Diageo also said it has extended Smirnoff’s sponsorship of the Force India Formula 1 team of which Mallya is team principal and part-owner for the next five seasons.

The cost of this sponsorship continues to be USD 15 million per season.

Commenting on the agreement with Mallya, Diageo’s CEO Ivan Menezes said, “India is an exciting growth opportunity, and USL has the management team, strategy and capability to deliver on that opportunity. The agreement announced today is in the best interests of both Diageo and USL and allows USL to build on its strong platform in one of the biggest spirits markets in the world.”