Silvassa-based company has held the trade name ‘Burger King’ in India since 1996 and had challenged the Florida-based burger corporation in the Delhi HC. 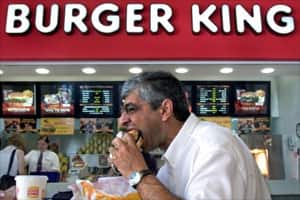 In a battle of the kings, Burger King Restaurants Pvt Ltd, a little-known fast food company that sells pav bhaaji and dabeli out of kiosks and street carts in Silvassa, the capital of the Union Territory of Dadra and Nagar Haveli, has taken on global behemoth Burger King Corporation.

The Silvassa-based company that sells only vegetarian fare has held the trade name ‘Burger King’ in India since 1996 and had challenged the Florida-based burger corporation in the Delhi High Court. In an interim order issued last week, the High Court has permitted Burger King Restaurant Pvt. Ltd. to approach the Intellectual Property Appellate Board, Chennai to strike out the trademark name of the US-based Burger King Corporation in India for non-use.

If the Indian company’s suit is successful, Burger King Corporation will not be allowed to use ‘Burger King’ in its name, logos and other properties. The appellate board’s decision is expected in three months.

Burger King Corporation, which was set up in the US in 1954 and made its much-anticipated entry into the Indian market this year, opening its first outlet in Delhi on November 9, owned its trade name for 35 years in India but since it had not set up operations here till last month, the Indian company was granted the name in 1996.

According to sources, the American multinational had approached the Indian company for talks in 2008 but they were subsequently put on hold.  This August, before its arrival in India, the MNC had reportedly sent out legal notices to a number of companies in India that had the names ‘Burger’ and ‘King’. The Silvassa-based company was one of whom it had allegedly asked to surrender its rights to the name ‘Burger King’ citing trademark violations. The company responded by filing a claim in court.

Meanwhile, both companies have big plans for expansion. Burger King Corporation, which has over 12,000 outlets in 100 countries, has plans to follow its Delhi debut by opening 10 more outlets across the country this year. Meanwhile, Burger King Restaurants plans to step out of Dadra and Nagar Haveli and take its franchise across Maharashtra, Gujarat and Delhi-NCR.