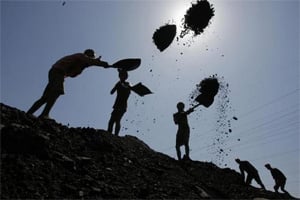 Coal India today reported over 28 per cent fall in consolidated net profit to Rs 2,192 crore in the second quarter of this fiscal due to higher expenses.

The world’s largest coal miner had clocked a profit of Rs 3,052 crore in the same quarter previous year, the company said in a BSE filing.

Its net profit took a beating as the company’s Q2 expenses rose by almost 8 per cent as compared to the flat growth in sales in the review period.

Total expenses increased to Rs 14,144 crore in the July-September quarter of this year from Rs 13,112 crore in the same period last year.
The bulk of the expenses were on employee benefits, on which the company spent Rs 7,286 crore, while contractual expenses went up to Rs 1,626 crore from 1,393 crore.

The miner accounts for over 80 per cent of domestic coal production. Its output stood at 462.42 million tonnes in the previous year.