The Confederation of Indian Industry (CII) is organizing Yoga sessions for Indian industry on the International Day of Yoga on June 21. 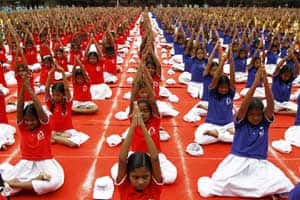 Students practice yoga in the lawns of their school ahead of International Day of Yoga, in Chennai (Reuters)

The Confederation of Indian Industry (CII) is organizing Yoga sessions for Indian industry on the International Day of Yoga on June 21.

Several thousand representatives of the Indian industry, including CEOs, employees and family members are rolling out their Yoga mats to practice this ancient Indian exercise.

“CII congratulates the Government of India for recognition of Yoga at the United Nations and wholeheartedly supports the efforts for its international popularization. Yoga, which originated in India, prevents incidence of non-communicable diseases which seriously impact social and economic development,” said SumitMazumder, President, CII.

“CII has long been active in promoting public health awareness among employees of Indian companies. The International Day of Yoga is a chance to re-emphasize Indian industry’s engagement with holistic health outcomes which are critical to overall national productivity and competitiveness,” stated Chandrajit Banerjee, Director General, CII.

CII, which has 62 offices in the Eastern, Northern, Southern and Western Regions as well as the North East Region, is partnering with ISHA Foundation founded by Sadhguru to hold Yoga sessions in industrial hubs. Iyengar Institute, Art of Living, and other Yoga institutes are also collaborating with CII.

The CII Central Office is celebrating International Day of Yoga with a discourse by Sadhguru Jaggi Vasudeva in New Delhi.

CII Eastern Region is hosting Yoga sessions at SNECL, Salt Lake, in Kolkata with 200 industry members. About 400 participants are expected to take part in Jamshedpur, Raipur, Bhubaneswar, and Patna.

In Mumbai, CII Western Region is partnering with Iyengar Institute for Yoga practice. Sessions will also be held at Indore, Bhopal, Ahmedabad, Goa, Pune, among other cities. In the Northern Region, CII is hosting sessions and workshops in Chandigarh, Delhi, Amritsar, and Ludhiana, as well as Baddi in Himachal Pradesh.

The Southern Region is organizing Yoga practice at 9 cities, including Bengaluru and Chennai. About 1500 practitioners are expected to take part.

The United Nations declared June 21 as International Day of Yoga after adopting a measure proposed by Prime Minister Narendra Modi.

Prime Minister Modi in his speech at the UN General Assembly in September last year called for recognition of such a day.