Technical flights have started from rain-hit Chennai airport where operations were suspended on Wednesday following flooding but it will take a few days to resume commercial flights, Union Minister Mahesh Sharma said today. 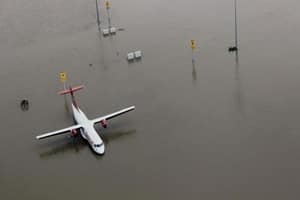 Technical flights have started from rain-hit Chennai airport where operations were suspended on Wednesday following flooding but it will take a few days to resume commercial flights, Union Minister Mahesh Sharma said today.

“We started technical flights from Chennai airport. But we are unable to resume commercial flights as the basement of the airport is still waterlogged and power supply of the terminal building has not been restored completely.

“It might take at least 2-3 days to clear the airport for operations,” the Minister of State for Civil Aviation said.
He said four commercial flights were operated from INS Rajali Naval base. Two flights of Indigo and one each of Spicejet and Trujet evacuated 310 people from there.

A total 34 aircraft of various airlines were stranded at the airport due to the flooding caused by torrential rains.
Chennai airport had suspended flights till Sunday in the wake of floods. It was yesterday declared fit for operating technical ferry and relief flights.

Following inspection of runway and other areas, the aerodrome was declared available for limited day time operations, under visual meteorological conditions for technical ferry and relief flight from Chennai airport, and subsequently upgrade to all weather operations as and when facilities are restored, an AAI statement had said.

On December 2, AAI had announced that the airport would be shut till December 6 after heavy rains caused flooding of the runway and nearby operational areas.

“Chennai Aerodrome has been closed up to 12 noon of the December 6, 2015. The situation is being closely monitored and any further action will be taken subject to review for resumption of services as soon as possible,” the AAI, which runs the airport, had said on December 2.

On an average, Chennai airport handles 320 landings and departures. As many as 20 international airlines operates from Chennai airport apart from most of the domestic carriers.