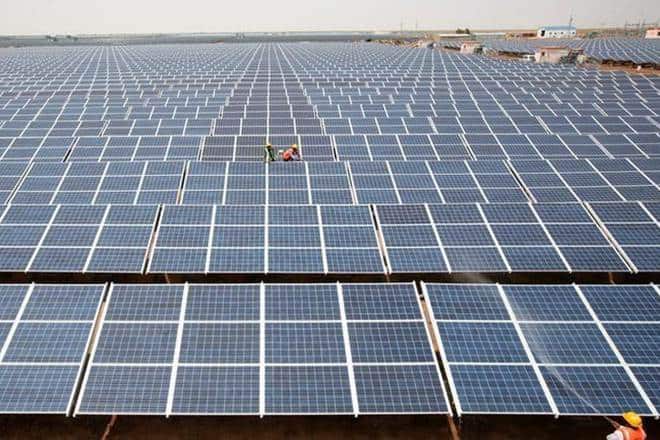 The scheme, approved by the Cabinet in February this year, aims to set up 10,000 MW of grid-connected solar power plants on farm lands (Representational image)

Power minister RK Singh met the energy ministers and senior officials of renewable energy-rich states to discuss the challenges of meeting the target of achieving 175 GW of renewable energy capacity by 2022. The agenda of the meeting, held on Tuesday, included renewable purchase obligation (RPO) compliance, solar scheme for farmers and irregular payments by the state-owned electricity distribution companies (discoms).

The ministers deliberated on the agricultural solar scheme (earlier known as Kusum), which can potentially help farmers earn about `1 lakh per year from every four acre of barren land they possess. The scheme, approved by the Cabinet in February this year, aims to set up 10,000 MW of grid-connected solar power plants on farm lands, install 17.5 lakh standalone solar pumps and connect 10 lakh existing agriculture pumps with solar power. Singh sought the support of the states to decide the tariffs at which they would buy electricity from the farmers, and their confirmation on their share of subsidy towards the scheme.

Addressing the issue of delayed payments by discoms to renewable developers, the participants deliberated on bringing information on outstanding dues in the public domain to ensure transparency. Renewable developers had complained that some discoms clear outstanding dues to conventional players well before solar and wind projects. Singh requested states to adopt the ‘first in first out’ principle to clear dues, without any sector-based disparity. The Union minister said that the solar energy corporation of India (SECI) is coming up with a payment security mechanism for renewable developers and some policy changes are also in the works to ensure disciplined payment.

The ministry also asked the states to consider issuing advisories to state electricity regulators to expedite the process of adopting tariffs arrived through competitive bidding. Apart from ensuring RPO compliance, the minister asked the states to update the Central government about the progress made by them on this front on a quarterly basis. The RPO trajectory notified by the Central government mandated the states to procure 17% of their electricity from renewable energy sources in FY19. However, the actual achievement in the fiscal was 10%. The share was 8.5% in FY18. Only Andhra Pradesh, Himachal Pradesh, Karnataka and Sikkim could achieve RPO compliance in FY19.