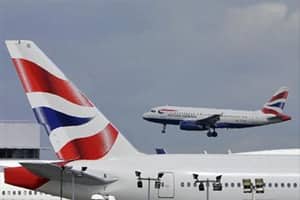 British Airways (BA) may consider partnering with an Indian carrier for hub-and-spoke operations in line with its relationship with American Airlines depending on how the market develops over the next 2-3 years, a top official said.

“India is the second largest market (for BA) after North America in terms of (traffic) volume or number of seats. … Our business model (with American Airlines) is to carry traffic to the hubs in the US from where they fly them to other destinations (within the US),” BA’s Chief Executive Keith Williams told PTI here.

“We will see how the market develops over the next 2-3 years. It is too early to judge at present,” Williams, who was here at a function to mark the completion of nine decades of the premier British carrier’s operations to India, said.

He was asked whether BA was looking at tying up with an Indian carrier to launch hub-and-spoke operations from five cities to London Heathrow (LHR) like their arrangement with American Airlines.

Under this arrangement, American Airlines, which merged with US Airways almost a year ago, provides convenient flight options to key business and leisure destinations across Europe and the United States.

BA currently operates 49 flights a week, with double dailies to Delhi and Mumbai, apart from dailies to Chennai, Bangalore and Hyderabad.

“As far as the Indian market is concerned, the network model should be smaller airports feeding into the hubs. In LHR, almost 40 per cent of passengers are transfer passengers,” Williams said.

In hub-and-spoke operation, an airline routes all of its traffic through one central hub or hubs.

Asked whether BA would consider operating superjumbo Airbus A-380s to Delhi or Mumbai as passenger traffic has gone up substantially, the BA Chief Executive said the double dailies were working fine as these two flights at different times were “convenient and beneficial to the customers”.

The airline, which currently flies jumbo Boeing-747s, was considering introducing the Dreamliner Boeing 787-9 to Delhi “due to its fuel-efficiency”, he said. Air India, which also operates two flights a day to London, too operates a Dreamliner on this route.

On nine decades of BA operations to India, Williams said “British Airways has been servicing this market for 90 years and we look forward to our association with India for another 90 years and more. … This year we create another milestone in our history with India.”

The first flight of then Imperial Airways (now BA) from London to Delhi had taken off on November 10, 1924, and had reached the Indian capital on March 17, 1925. It had taken four different planes and 20 stops en route to complete the journey.