Bringing tax down while pruning sops may raise corporate burden 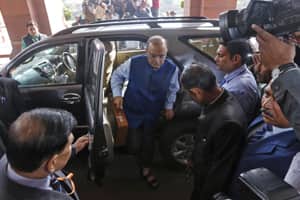 Finance minister Arun Jaitley’s announcement to bring down corporate tax rate to 25 per cent over a four-year period while pruning down exemptions could actually mean a rise in the corporate tax burden for many companies.

Budget documents further reveal that while mining contractors have an effective corporate tax burden of Rs 7.23 per cent, that for film distribution companies is 9.23 per cent.

Announcing the decision to lower corporate tax rate, finance minister Arun Jaitley had referred to the large number of exemptions. “We lose out on both counts — we are considered as having a high corporate tax regime but we do not get that tax due to excessive exemptions. A regime of exemptions has led to pressure groups, litigation and loss of revenue. It also gives room for avoidable discretion,” he said while presenting the Union Budget 2015-16.

In contrast, smaller companies with a PBT of Rs 1 crore had a higher effective tax rate of 26.89 per cent on the back of phasing out of profit-linked deductions and levy of minimum alternate tax.

“Industries that get larger exemptions will be penalised while those whose effective tax burden is 25 per cent would be rewarded. In all the marginal burden would be equalised but we must also realise that not all exemptions would be weeded out,” said DK Srivastava, chief policy advisor, Ernst and Young, adding that the effective tax rate would continue to be about 23 per cent but would help improve efficiency in tax administration.

On the whole, the effective corporate tax rate for manufacturing forms is lower at 21.96 per cent while those in the service sector was 24.37 per cent in 2013-14. Significantly, public sector firms enjoy a lower tax rate of 19.33 per cent against 24.44 per cent by private sector companies.

“It is not as if all deductions and exemptions are bad. They were given due to requirements of the sector at the time that in turn helped development of the economy and creation of jobs,” pointed out a government official, adding that many of these were phased out gradually.

The projected revenue impact of corporate tax incentives in 2014-15 is estimated at Rs 62,398 crore as against

Rs 57,793 crore. The biggest giveaways are benefits such as accelerated depreciation that have a projected revenue impact of Rs 37,010 crore and deductions to power distribution and transmission companies under section 80 IA of the Income Tax Act that have are estimated to impact revenues collections by Rs 10,607 crore.