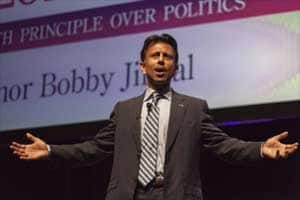 Bobby Jindal the smartest candidate in presidential race of 2016 : US daily. (Reuters)

A portrait of Indian-American Louisiana Governor Bobby Jindal has sparked a racial controversy in the US with the Republican presidential aspirant appearing to be a white man in the painting instead of his actual skin tone.

Though the painting, made by Louisiana painter Tommy Yow Jr, who had painted the unofficial portrait from a photograph, had been hanging in his Capitol Office since 2008, it went viral on the social media this week when a blogger Lamar White tweeted with a picture of the portrait.

The tweet and the portrait went viral on social media in which blogger White claimed that this was the official portrait of Jindal.

It got more attention when Jindal’s Chief of Staff, Kyle Plotkin, slammed the blogger for race biting.

“Liberals want to race-bait and they think the governor looks insufficiently brown in the picture. No other reason to tweet that picture. They are ok with the governor being brown, but they want to make sure he knows it,” Plotkin was quoted as saying by a local daily.

Yow Jr, who had painted the now controversial portrait of Jindal, told the Politico that he painted it from a photograph.

He said that the photo that caused the outrage on Twitter was “an excellent hatchet job of using either light reflection or flash on (Jindal’s) head area to even further lighten the head area of the painting.

Yow said that he has never met the governor in person.

When he painted the portrait, Yow said, he was less familiar with Jindal’s actual skin tone, the Politico reported.

The local Times Picayune questioned the very basis of running a story on a painting which has been hanging at the Louisiana Capitol Office since 2008.

“The portrait is front and center when people exit the elevator and enter the governor’s fourth floor office suite. Though it’s been a well-known fixture in the Capitol for years, it turned into an internet sensation this week, when a left-leaning blogger and Jindal’s chief of staff got into an argument on Twitter about it,” the daily said.

“The question is: Should this be a big deal? Why is everyone suddenly paying attention to a portrait that is several years old? Do we care in Louisiana?” the daily asked.