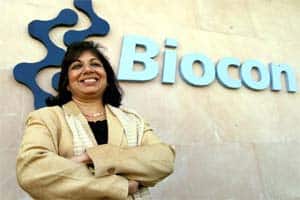 The company had posted a net profit of Rs 46.6 crore for the corresponding period of the previous fiscal, Syngene International said in a filing to BSE. (Reuters)

The company had posted net profit of Rs 90.9 crore for the October-December period of the 2014-15 fiscal, Biocon said in a statement.

Its consolidated total income from operations also rose to Rs 836.4 crore during the quarter, as against Rs 769.2 crore in the year-ago period.

Biocon Chairperson and MD Kiran Mazumdar-Shaw said: “Excluding profit contribution from Syngene, Biocon’s net profit this quarter has increased by 28 per cent y-o-y despite a 45 per cent jump in R&D spends and a significant increase in tax.”

This reflects a marked improvement in the quality of the company’s earnings led by better realisations from biosimilars and immunosuppressants in emerging markets, she added.

The company’s research and development spends at Rs 68 crore grew by 45 per cent reflecting progress of its biosimilars and novel programmes, Biocon said.

“Biocon’s four most advanced bio-similar and generic insulin programs, Insulin Glargine, Trastuzumab, Pegfilgrastim and Adalimumab, continue to cross critical clinical milestones and are on track for regulatory filings in US & Europe in CY 2016,” Shaw said.