Telecom major Bharti Airtel today said it may invest an additional USD 200-400 million in the current financial year to ramp up 3G and 4G infrastructure. 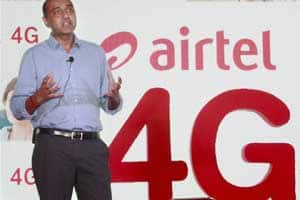 Telecom major Bharti Airtel today said it may invest an additional USD 200-400 million in the current financial year to ramp up 3G and 4G infrastructure.

Bharti Airtel had already announced a capital expenditure guidance of about USD 3 billion for this fiscal.

“Our willingness to spend an additional USD 200-400 million on capex during the course of this year. A large part of that capex would really be around expanding our footprint in 3G and 4G,” Bharti Airtel MD and CEO (India and South Asia) Gopal Vittal said during an investor call.

He added that when 3G network is expanded, voice quality also improves.

“… in a way it’s actually killing two birds with one stone, which is the investment actually goes to drive incremental revenue streams, which is around data but at the same time, it creates the capacity to unclog 2G networks, especially in situations where spectrum has been reduced for markets like Delhi and that helps the overall call quality,” Vittal added.

On the issue of call drops, Vittal said the Bharti Airtel is working with the government to address the problem.

“We are working with the government to address the problem of fixing of network infrastructure by deploying cell towers, providing adequate and affordable spectrum as well as educating citizens on radiation fears… We view this as the most effective way to address any call drop issue that may exist in the system,” he added.

On a query if Airtel could increase tariffs, Vittal said the company would look at opportunities but it won’t be at the cost of losing competitiveness.

“We always maintain that we would like to see voice realisation move up, we continue to stick to that position but we have to operate in a competitive market, so we would look at opportunities to raise the pricing but we will not allow it to be at the cost of any competitiveness because the cost of recovering market share in a category like ours is very high,” he said.

Vittal added that there has been a marginal pressure on voice pricing in the reported quarter and the competitive intensity continues to be unabated not just by the smaller players but larger players as well.

“We will keep calibrating our position between both price opportunities as well as volume opportunities without ceding any competitive ground. Our objective would be to continue to drive revenue and profitable growth,” he added.