U.S. President Barack Obama arrives in India on for the second time, to build on what he calls one of the defining relationships of the 21st Century. 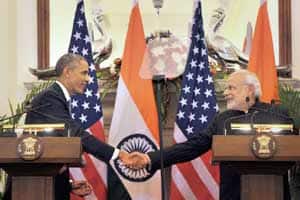 Following are some key agreements and points of discussion during Obama’s visit:

India and the United States struck a deal that could open the door for U.S. companies to build nuclear reactors in India by promising insurance cover to U.S. companies that had shied away from an Indian law placing liability on suppliers in case of an accident. It remains to be seen whether the new pact will satisfy companies such as GE and Toshiba-owned Westinghouse, who had stayed away since a landmark 2008 agreement that ended India’s nuclear isolation. The new pact also resolved differences over U.S. demands on tracking the whereabouts of material supplied to the country.

India’s size, location, fast-growing economy and potential as a democratic counterbalance to China makes the South Asian nation an increasingly important element of U.S. military and commercial strategy. Prime Minister Narendra Modi’s assertiveness in the region has already aligned India more with Washington, and the two leaders reiterated a September statement affirming “the importance of safeguarding maritime security and ensuring freedom of navigation and over flight throughout the region, especially in the South China Sea,” a veiled reference to China, which is asserting territorial claims in the region.

“We call on all parties to avoid the threat or use of force and pursue resolution of territorial and maritime disputes through all peaceful means, in accordance with universally recognized principles of international law, including the United Nations Convention on the Law of the Sea,” they said in a statement.

India and the United States do not see eye-to-eye on Pakistan, and India is worried about the exit of U.S. troops from Afghanistan. India wants greater cooperation on terrorism and access to high-technology goods for civilian and military use.

The United States overtook Russia as the biggest weapons supplier to India, the Indian government said in August. India is the world’s biggest weapons importer. The two countries finalised a defence framework pact for 10 years. Four deals were unveiled on the trip, including joint production of Raven drones and systems for Lockheed’s C-130 transport planes. The two countries will also explore jointly developing jet engine technology.

The United States and India are expected to announce efforts to work together to combat climate change ahead of key global talks in Paris later this year. India, the world’s third largest carbon emitter, is reluctant to follow the United States and China in committing to a peak year for emissions on the grounds it needs economic growth to alleviate poverty. Instead, India is likely to trumpet its plans for a rapid expansion of renewable energy, for which it needs U.S. investment and technology, and improving energy efficiency.

India wants U.S. companies to help lead investments of $100 billion in renewable energy. Modi promised to help renewable energy companies overcome entry to the Indian market during his trip to Washington last year. A barrier to investment is a requirement that foreign companies make much of the equipment within India, which business leaders say will push up costs.

India and the United States said they will establish several bilateral mechanisms to identify opportunities to boost business, trade and investment ties. Modi and Obama last year targeted a five-fold increase in annual trade to $500 billion. But U.S. business leaders have been frustrated by limits on their access to the Indian market, and battles over intellectual property protection. Both the countries have also filed several cases against each other at the World Trade Organisation over protection of their domestic steel, poultry and solar industries.