Why silver could be a better investment than gold

It is the time to invest in silver! Experts believe that the white metal will be favoured more over gold during the upcoming festive season. 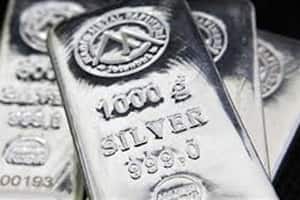 Silver is used in many different sectors, including manufacturing, technology, jewellery, and tableware.

It is the time to invest in silver! Experts believe that the white metal will be favoured more over gold during the upcoming festive season.

Silver prices retreated 12.83 per cent to Rs 33,995 per kg on September 15 from Rs 39,000 per kg on May 15. According to market experts, silver prices declined following a correction in gold and base metals due to the Chinese-led slowdown.

Silver at current prices in the Indian markets looks at a very good level when compared to the highs of around Rs 70,000 per kg in the year 2011. “Silver demand will be good in the upcoming festive season when compared to gold. The fall in silver prices is drastic when compared to gold, hence it would be a bargain hunt for investors at these levels. Festive demand will see silver being more favoured over gold, as gold prices are now dependent on complex set of factors ranging from rate hike in the US, weak investment and physical demand from India and China the two biggest consumers of the yellow metal,” Prathamesh Mallya, senior research analyst, non-agri commodities, Angel Commodities Broking, said.

Demand and supply of the commodity remains intrinsic factor for any commodity including silver. According to market experts, gold and silver prices also move in tandem hence, gold prices and its fundamental factors have to be looked in to before investing in silver. Movement in the dollar index and the base metals complex has to be closely watched before investing. Revived investment and industrial demand from Asian economies and speculative positioning as reported by the CFTC (Commodity Futures Trading Commission in the US) is also the key to invest in the white metal.

In the past five months, silver has declined over 12 per cent against 5 per cent fall registered by gold during the period. “Silver price fell in last few months on account of pressure from strong dollar in consideration the US Fed likely to hike rate by year end added by strong equity market which offset bullion appeal as safe haven assets,” Vibhu Ratandhara, AVP, commodity, Bonanza Portfolio, said.

According to GFMS, the global supply of silver is estimated to be 31,850 tonnes while the demand side is estimated at 32,455 tonnes, leading to a net deficit of around 600 tonnes in 2015. Additionally, the silver market is expected to be in a deficit of 57.7 million ounces in 2015, as supply contracts and physical demand grows.

The gold-to-silver ratio, a simple measure of the metals’ relative prices is calculated by dividing the price of an ounce of gold by the corresponding price of silver. Mallya said, “The ratio averaged 73 in the first half of 2015, indicating that silver is under priced relative to gold.” This gives way to increased potential for buying in the silver. The metal will be the favoured asset because of the low prices and hence prices will trend higher going forward.

Jimeet Modi, chief executive officer, SAMCO Securities, added, “The emergence of demand from photovoltaic cells (PV) will be the game changer event for silver. It is expected that PV demand will constitute 15 per cent of total mined output of silver in next 4 years from current 10 per cent. The ambitious 1000 GWs of solar power generation planned across the world will largely decide the demand and price for the silver in the long term, in addition to safe heaven demand if any that may arise due to any unforeseen events.”

Silver has the highest electrical and thermal conductivity of all metals. This property of silver makes it an important constituent of solar cells. It is used in the form of silver paste, which is used to conduct electricity out of solar cells.

According to experts, global silver ETF holdings increased by over 4.7 million ounces in 2015 till July, indicating that these investors likely have a more positive longer-term view of the silver price.

From an investment point of view, Kunal Shah, head of commodities research, Nirmal Bang Commodities is bullish on silver and said, “Silver prices are likely to move up in 2016.Silver has remained under pressure due to selling in gold and base metals but industrial demand has remained very strong from electrical, solar and various industries so we recommend that any decline in silver prices now should be used as excellent buying opportunity and by the end of the years we may see it settling at Rs 39,000-Rs 40,000 per kg.”

“Demand for silver is expected to be strong in near future as rural demand for gold has declined following weak monsoon. The white metal is cheaper compared to gold that will push silver’s demand,” said Vibhu Ratandhara.