Reserve Bank of India Governor Raghuram Rajan will unveil the bi-monthly monetary policy review on Tuesday, June 7, amid speculation over his tenure. 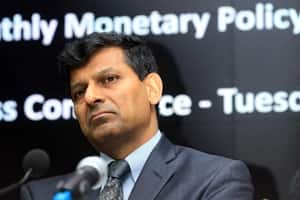 Reserve Bank of India Governor Raghuram Rajan will unveil the bi-monthly monetary policy review on Tuesday, June 7, amid speculation over his tenure.

The central bank had announced a 25 basis points repo rate cut in its last policy review on April 5, 2016. Monsoon forecast and inflation figures will determine Rajan’s stance on the key rates on Tuesday.

– GDP growth numbers: Indian economy grew at a robust 7.9 per cent in the fourth quarter of the financial year gone by as against 7.2 per cent (revised from 7.3% earlier) in Q3 of FY16.

“The better than expected GDP reading earlier this week gives the RBI less of an inclination to cut the headline repo rate. While it was already expected that the RBI would not be cutting rates due to inflationary pressures, this only gives Raghuram Rajan more time to wait until a rate cut is absolutely needed. Accelerating growth has been the government’s prime focus over the past year, and now that the GDP figure has been released, the markets are expecting the RBI to keep rates steady, ”  Raghu Kumar, co-founder, RKSV said.

– Monsoon progress: The Indian Meteorological Department (IMD) on Thursday stuck to its initial forecast for above average monsoon rains in 2016, boosting hopes for a revival in agricultural output that could translate into lower food prices and also lower interest rates. It comes as a relief after two successive years of drought.

– Inflation: The CPI inflation for the month of April jumped to 5.39 per cent from 4.83 in March. Rajan in his last policy meet in April had said that he was closely watching inflation developments as well as monsoon rain forecasts in terms of the impact on monetary policy. The central bank has set a target to reduce inflation to 5 per cent by March 2017 and to 4.2 per cent by March 2018.

– Oil Prices: This calendar year, crude oil prices have already surged over 30 per cent in the international as well as domestic markets. Crude oil prices surged from a level of under $40 per barrel in March 2016 to levels of around $50 per barrel, raising concerns about a rise in inflation. Oil prices soared nearly 79 per cent to $49.89 per barrel on May 31, 2016 from the low of $27.88 per barrel on January 20, 2016.

“The stubborn underlying inflation momentum is unlikely to be helped by the 7th Pay Commission award and the effects of the one-rank-one-pension (OROP) award, or by the cost-push effect of the increase in the service tax rate. However, rural wage growth as well as the rate of increase in corporate staff costs was moderate. Also, input and output prices polled in purchasing managers’ surveys rose modestly for manufacturing and services, ” Rajan had said during April 5 monetary policy review.