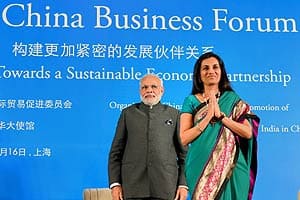 On the last day of his three-day visit to China, the Prime Minister inaugurated the branch in the presence of ICICI Bank’s MD and CEO Chanda Kochhar, senior Chinese and Indian government officials and business representatives.

“Our branch in Shanghai will allow us to play a greater role in the growing trade and investment opportunity between India and China.

“We foresee a heightened amount of bilateral activity taking place between the two countries in the near future. With the opening of this branch, ICICI Bank is strategically poised to take advantage of the increased opportunities,” Kochhar said.

ICICI Bank with presence in 17 countries, earlier had a representative office in China, which it had opened over 10 years ago in 2003.

The bank said it has upgraded its representative office in Shanghai to a branch keeping in mind the rising trade volumes between India and China.

Besides normal banking activities permitted under the guidelines of the China Banking Regulatory Commission, the Shanghai branch would also facilitate international trade between China and other countries and support Chinese firms and contractors bidding for infrastructure projects and funding requirements in India.

It will also help in business expansion of Indian joint ventures and subsidiaries of Indian entities in China and on remittances from China to India.

Some public sector banks including SBI, UCO Bank, Canara Bank and Allahabad Bank have also expanded their presence in China in the recent years to tap growing trade flows between the two countries.

“With this branch, the bank aims to provide greater support to Chinese and Indian corporates in their cross-border business interests,” it said in a statement.

ICICI Bank’s global footprint consists of subsidiaries in the UK and Canada, branches in the US, China, Singapore, Bahrain, Hong Kong, Sri Lanka, Qatar and Dubai International Finance Centre, and representative offices in UAE, Bangladesh, Malaysia and Indonesia. The bank’s UK subsidiary has established branches in Belgium and Germany.

Its shares are listed in India on BSE and NSE, while its American Depositary Receipts (ADRs) are listed on the New York Stock Exchange (NYSE).