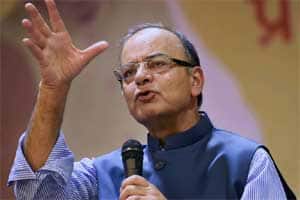 Finance Minister Arun Jaitley has promised a rational tax rate for individuals and bringing down of corporate tax to 25 per cent flat in four years beginning next fiscal along with removal of exemptions except those that encourage individual savings. (PTI)

The proposed payments banks will change banking habits in the country as more and more people entering formal banking network would act as a “game-changer” for the economy, Finance Minister Arun Jaitley said today.

RBI has given nod to 11 entities to launch such niche banks within next 18 months.

He said going ahead, banking is going to be more of technology-enabled and effort is now on to expand banking to every unbanked corners of the society.

“… using banks for all transactions, small and middle will become a habit of the people. More and more outside of the regular economy will get into the economy. And this itself is going to be a big game-changer as far as the Indian habits and Indian economy is concerned,” Jaitley said.

Jaitley said banking network is expanding hugely and the health of banks reflects on the challenges for the economy.

“While on one hand we can take some satisfaction in the fact that networks are expanding across the country, there is huge amount of activity which is still to be done,” he said.

Earlier this week the RBI gave ‘in-principle’ nod to 11 entities, including Department of Post, Reliance Industries, Aditya Birla Nuvo, Vodafone and Airtel, to set up payments banks and proposed such licences ‘on tap’ in future.

Payment banking licence will allow companies to collect deposits (initially up to Rs 1 lakh per individual), Internet banking, facilitate money transfers, and sell insurance and mutual funds. They can issue ATM/debit cards, but not credit cards.