India will hold the Presidency of the USD 100 billion New Development Bank for the first six years. 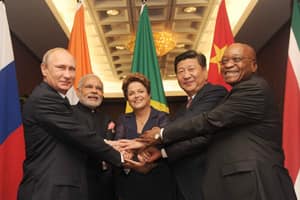 Making a strong pitch for speeding up the creation of a BRICS development bank, Prime Minister Narendra Modi today said India hopes to ratify the agreement over the financial institution by year-end and 2016 should be set as the target for its inauguration.

“The historic 6th BRICS Summit in Fortaleza delivered the New Development Bank and the Contingent Reserve Arrangement. These signal our collective capacities to create and manage global institutions,” Modi said at an informal meeting of leaders of the five-nation BRICS bloc here.

“We propose that we should set the target of 2016 for inauguration of this Bank. We hope to ratify the agreement by the end of the year. We would soon nominate our candidate for the post of the Presidency,” Modi said, making a strong pitch for the early operationalisation of the bank.

India will hold the Presidency of the $100 billion New Development Bank for the first six years.

The bank will be based in Shanghai, China’s financial hub.

India’s presidency will be followed by Brazil and Russia who will have five years term each under an agreement reached after intense negotiations among the five country-grouping BRICS — Brazil, Russia, India, China and South Africa.

The decision to set up the bank and a USD 100 billion Currency Reserve Arrangement (CRA) that will help countries to deal with short-term liquidity pressures, was made at the 6th BRICS Summit held in the Brazilian city of Fortaleza in July.

Modi said that the bank and the CRA can be effective in promoting sustainable development and bridge infrastructure gaps.

“These measures send a strong message to the rest of the world about the efficacy of BRICS,” he said in his speech delivered in English.

“We can be more aligned to local conditions and requirements. We should focus on next generation infrastructure. We can promote new models of governance and financing, while maintaining the highest banking standards,” Modi said.

“We should also make it more participatory. We need to work towards their early implementation,” he said.

Talking about the CRA, the Prime Minister said it is a “very timely” initiative. He said the work on the re-insurance pool among BRICS is also a welcome one.

“We hope that our officials will be able to come up with a concrete proposal by the next year,” Modi said.