Finance minister Arun Jaitley also sought additional funds to the tune of Rs 12,010 crore for bank recapitalisation as part of the first supplementary demand for grants for 2015-16. 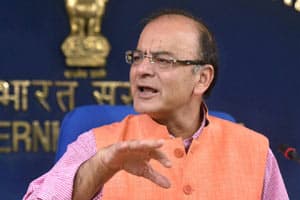 The government is of the view that the Budget exercise should ideally be over by March 31 every year as against the present practice of it being carried in two phases spread between February and May. (PTI)

As a slew of public sector banks reported a sharp rise in bad loans in the first quarter of the fiscal, the finance ministry on Friday announced four-year road map for infusing Rs 70,000 crore in state run banks. Finance minister Arun Jaitley also sought additional funds to the tune of Rs 12,010 crore for bank recapitalisation as part of the first supplementary demand for grants for 2015-16.

“As of now, the PSBs are adequately capitalised and meeting all the Basel III and RBI norms. However, the government wants to adequately capitalise all the banks to keep a safe buffer over and above the minimum norms of Basel III. We have estimated how much capital will be required this year and in the next three years till financial year 2019,” said a department of financial services note.

The move was also welcomed by the Reserve Bank of India that has frequently underlined the deteriorating health of PSBs. “The allocation for the first year is adequate…it’s a good beginning,” said RBI governor Raghuram Rajan.

RBI deputy governor R Gandhi also welcomed the move. “We will be eagerly watching out for the four year path,” he said.

The FY16 Budget had allocated Rs 7,940 crore towards recapitalisation of state run banks this fiscal with the finance minister. “The provision is for recapitalisation of public sector banks to enable them to maintain their Tier-I capital at comfortable level,” he had announced, adding that banks had been permitted reduce government stake to 52 per cent in order to raise funds.

However, over the past one week, more than half a dozen state-run lenders including Punjab National Bank, Bank of India, Indian overseas Bank, Union Bank, Bank of Baroda, Oriental Bank of Commerce, Dena Bank and Vijaya Bank posted a decline in profits following a spike in non-performing assets. In 2014-15 too, the government had allocated capital infusion of Rs 11,200 crore to PSBs but later enhanced it by Rs 6,990 crore that was disbursed amongst nine banks.

Financial services secretary Hasmukh Adhia said there should be some improvement over the next two quarters. “Various initiatives taken (to address NPA issue) should work if not in immediate quarter, in next two quarters things should start looking up,” he said.