The rupee today lost 19 paise against the dollar at 63.30 at close as initial gains were washed out. 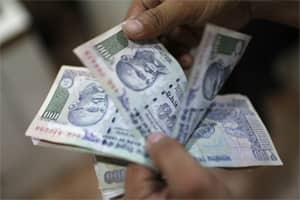 The Indian rupee today lost 19 paise against the dollar at 63.30 at close as initial gains were washed out on account of strong demand for the US currency from oil companies even as stock markets were bullish.

Finance Minister Arun Jaitley in Parliament, however, said there was “no serious crisis” for the domestic currency as it was stabilising after a few days of “volatility”.

“I don’t see any serious crisis on the real value of rupee,” he asserted.

The rupee had plunged to 13-month low of 63.53 earlier this week amid chaos in global financial markets caused by volatility in Russian currency rouble.

Rupee weakness was also aided by investor fears that US Fed Reserve in December 16-17 meet would start the process of rate hike that would have sucked up liquidity in emerging markets, including India. Much to the relief of investors, the Fed said a rate hike was unlikely in the short-term.

The rupee had declined by a steep 132 paise or 2.12 per cent in three days of losses till December 17 before it notched up a 50-paise gain yesterday.

Forex dealers said strength in dollar which has hit multi-year high in overseas markets, also weighed on the rupee heavily today notwithstanding a rally in local equities.

At the Interbank Foreign Exchange (Forex) market, the domestic unit breached the 62-level in early trade in tandem with gains in stock markets.

The rupee, however, succumbed to selling pressure amid continued capital outflows and settled the day 63.30, a net fall of 19 paise or 0.30 per cent from its previous close.

“Rupee is performing better compared to other emerging markets,” he added.

“There was turmoil and volatility as far as emerging markets were concerned. After two days of volatility, there is a sobering effect as far as Indian rupee is concerned, he said.

More Stories on
Indian rupee
Next Story
Tech powering the life saving wheels: The science of IT in an ambulance