Indian rupee continues fall against US dollar, dips to 61.72 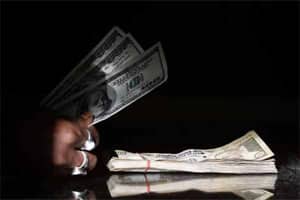 The Indian rupee continued to fall against the American currency for the third consecutive week, slipping by another 10 paise to end at nearly one-month low of Rs 61.72 on sustained dollar demand from banks and importers.

The rupee opened higher at 61.45 per dollar as against last weekend’s level of 61.62 in the Interbank Foreign Exchange (Forex) Market on initial selling of dollars by banks and exporters in view of good foreign capital inflows.

However, it failed to maintain its initial gains and dropped to 61.83 on fag-end dollar demand from banks and importers before finishing the week at 61.72, disclosing a loss of 10 paise or 0.16 per cent.

This is its lowest close of the India currency since October 16, 2014.

The US dollar rose against its major rivals in the global market. It ruled at a fresh seven-year high against Japanese yen, bolstered by rising Japanese equities.

In the forward market, premium firmed up on fresh paying pressure from banks and corporates.

The rupee improved further against the pound sterling to 96.65 from 97.53 from last weekend level but dropped to 76.82 per euro from 76.40 per euro previously.