Over the last one week, Indian rupee had been mostly quiet against the US dollar. 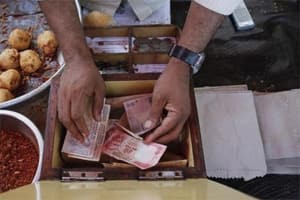 Over the last one week, Indian rupee had been mostly quiet against the US dollar. Except for the late exuberance on last Friday, where it tested 61.80 levels against the Greenback, not much activity happened in that pit. Large speculators are happy to write options and collect the premium. On the offshore, traders are quite eager to play the carry, evident from the wide discount on USD/INR forwards their compared to their respective onshore contracts. As a case in point, the 12 month forwards on offshore is quoting a hefty discount of 110/15 paise compared to its 12-month onshore counterpart. An easy but yes risky way to play the interest rate differential between US and India as well the appreciation of Rupee is to sell into a spike on the forward months and wait out till expiry. It becomes a home run as long as USD/INR spot prices do not rise more than the forward premium at which one sold. As far as levels as concerned, alleged bids and offers from central bank closer to 61.00 and 62.00 and also offers from custodial banks and exporters is what keeping the pair locked in a tight range.

Interestingly the recent foreign exchange activity report from the RBI showed that the central bank remains an active two way player in the USD/INR pair. It appears that RBI could still be apprehensive about the durability of stability in the Rupee. As a result, they have continued to employ an active interventionist approach towards foreign exchange markets. As a result, Rupee has gone into a slumber against the US Dollar and which in turn continues to encourage global speculators to go long on Rupee on an unhedged basis to play the Euro and Yen carry trade. At the same time, an environment of suppressed volatility can also breed complacency amongst the commercials who have foreign currency liabilities or payments. Though RBI has tried use verbal persuasion to get them to hedge their commitments but if history is any guide then it might prove difficult. It is human nature to ignore risk, when things appears calmer and greater the serenity, the higher the complacency. In fact there is talk that RBI might increase the provisioning ratios for banks who have clients with unhedged foreign currency liabilities.

In this tsunami of global liquidity, it is hard to find a financial asset market or financial asset class which has not taken part in the carnival orchestrated by the central banks. India being a dominant theme, is able to attract sizable portion of that liquidity. The liquidity deluge can continue till the time a major reality check happens. Infact, currently the rise in the US Dollar against many currencies could be one of the reason why Rupee is not trying too hard to appreciate against the Greenback. Though, Rupee has appreciated quite a bit against non-Dollar currencies. Next year, if the US Fed gets cold feet about the sharp appreciation in the US Dollar and decides to talk it down and or US economic data disappoints, then we can expect immense pressure on Rupee to appreciate even against the Greenback. We would then expect the central bank to step in and protect the Greenback, but it shall come at a considerable cost.

India is experiencing a goldilocks financial cycle with a firm US Dollar coexisting with shift of carry flows towards theme based markets like ours. A similar cycle had played out during 1996-2000, when a firmer US Dollar and weaker Asian and EM growth made speculators shun hard assets like commodities & real estate and alternative currencies like Gold. Currently, China alongwith host of other Asian and EM economies are weak and can not shoulder another commodity reflation cycle. At the same time, a stronger US Dollars is making speculators shun Gold, inspite of the monetary devaluation from the central banks in the G8. Inflation is manifesting through financial assets in India and world over.

Financial assets like equity and debt are benefitting disproportionately from this boom. Inflation as a concept is often misrepresented. Inflation means increase is supply of money. Higher money supply can be in terms of freshly printed money from central banks, through balance sheet expansion or it can be through multiplier of money via credit creation. As more money is made available, prices of goods and services to financial assets and hard assets are bid higher. However, the effect of inflation, i.e. higher prices, is not uniform. Depending on the situation in the economy and financial markets, it can have greater impact on one part of the economy over the other. Currently, effect of monetary devaluation is a financial asset boom and not a hard asset boom.

Economic data was mixed from India. India’s industrial production growth improved in September to 2.5% from 0.5% and 0.4% over the previous two months. However on an absolute basis, growth remains dismal. For a developing country like India, growing year on year at 2.5% is not impressive. IIP growth has to move above 5/6% and sustain before we can say that the industrial sector has managed to attain escape velocity. Mining grew at 0.7%, manufacturing at 2.5% and electricity at 3.9% y/y in September. Capital goods grew at 11.6%, but it has been very volatile in the past due to the nature of the order booking and execution of the industry. At the same time, consumer goods contracted by 4% due to an 11.3% contraction in consumer durables. A continued sharp drop in the consumer durables is an indication of a weak consumption demand. Consumer non-durables grew at a snail pace of 1.5%.

The Consumer-Price Index (CPI)-based inflation fell to an all-time low of 5.52 per cent in October against 6.46 per cent in the previous month. Consumer food price inflation, which has a 42.71 per cent weigh in CPI, eased to 5.59 per cent from 7.67 per cent in September and 12.93 per cent in October last year. CPI can remain subdued over the next few months, as low commodity prices and high base effect benefit.

Globally economic data was mixed, with UK reporting a solid set of employment statistics. Average weekly earnings, excluding bonuses, rose by 1.3% in the three months to September, after a 0.9% increase in the three months to August. It was the first time since the onset of the 2008 financial crisis that average weekly earnings, excluding bonuses, outstripped inflation. The number of people claiming unemployment benefits fell by 20,400 in October and the U.K. unemployment rate was unchanged at 6.0% in the three months to September. However, GBP/INR ignored the strong jobs report as the Bank of England reported earlier inflation will likely remain below its 2% target in the near term and fall below 1% at some point during the next six months. The bank said it now expects inflation to take three years to return to its 2% target. In Euro zone, Germany and France, region’s two largest economies, have narrowly avoided recession – Germany registering 0.1% growth and France recording 0.3%, mainly due to government spending.

Chinese economic growth decelerated further, evident from the October IIP, which grew at second weakest pace since 2009. Fixed-asset investment, an important driver of growth, grew 15.9 percent in October, the National Bureau of Statistics said on Thursday. That was the weakest pace since December 2001. At the same time, China posted weak lending figures In September, it injected 500 billion yuan ($US81.5 billion) into the commercial banking system and in October a further 269.5 billion yuan using medium-term lending facilities, a new tool aimed at meeting temporary liquidity needs. It also routed credit to the agriculture sector and smaller companies. for October despite a massive capital injection and other efforts by its central bank to spur growth.

Over this week, traders will keep a close eye on US Fed minutes as a hawkish central bank can send the US Dollar even higher, and especially against the Rupee, towards 61.90/62.00 levels. At the same time, flash PMI surveys from Euro zone and China for the month of November will be watched. US economy will also be reporting regional manufacturing surveys. However, Rupee would continue to trade within a range of 61.00 and 62.00/62.20 for some time to come. Option traders have built sizable open interest in the 61.00 and 62.00 and 62.50 call option for 1/3 months. Rupee, will remain strong against Pound and Yen but ranged against Euro.