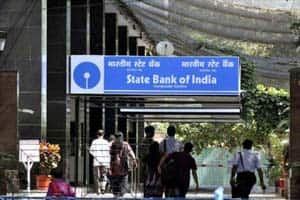 State Bank of India shares surged over 9 per cent on Friday after investors cheered the news of drop in slippages (fresh bad loans) of the public sector bank. (Photo: PTI)

This is the first tranche of capital infusion for which the government had allocated Rs 11,200 crore in the Budget for 2014-15.

“Out of the current year’s budget, the Government of India has decided to infuse Rs 6,990 crore in nine Public Sector Banks (PSBs) for which orders are being issued,” an official statement said.

This year, it said, the government has adopted new criteria in which the banks which are more efficient would be rewarded with extra capital so that they can further strengthen their position.

“The methodology for arriving the amount to be infused in these banks has been based on efficiency parameters. First of all, weighted average of return on assets (ROA) for all PSBs for last three years put together was arrived at and all those who were above the average have been considered,” it said.

The second parameter that has been used is return on equity (ROE) for these banks for the last financial year. Those who have performed better than average have been rewarded, it added.

The government is in the process of deciding on remaining Rs 4,210 crore capital infusion. The entire fund infusion will be completed before March 31.

Finance Minister Arun Jaitley in the Budget speech had said that “to be in line with Basel-III norms there is a requirement to infuse Rs 2,40,000 crore as equity by 2018 in our banks. To meet this huge capital requirement we need to raise additional resources to fulfil this obligation”.

While preserving the public ownership, the capital of these banks will be raised by increasing the shareholding of the people in a phased manner through the sale of shares largely through retail to common citizens of this country, the minister had said.

The statement further said that the government is conscious of the fact that a lot of reforms are required in the state-owned banks.

With a view to crystallise ideas for reforms, recently a two-day Retreat of heads of public sector banks and financial institutions called ‘Gyan Sangam’ was held, it said.

“This Retreat generated an agenda in which banks themselves were supposed to undertake certain activities individually or jointly and there were certain things which were supposed to be done by the government,” it added.

One of the general principle adopted during the Retreat was that efficient banks should be encouraged, it said.

For the last few years, it said, the government has been infusing capital to those banks whose equity erosion has taken place.

“Therefore, this year, the Government of India has adopted this new criteria in which the banks which are more efficient would only be rewarded with extra capital for their equity so that they can further strengthen their position,” it added.