The Indian rupee has climbed to heights seen only once before in the past decade, as measured against the currencies of the country’s trading partners… 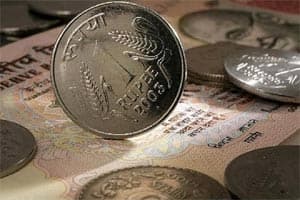 As a result of sound prudent policies formulated during 2015-16, the fiscal deficit at the end of November is Rs 4.83 lakh crore or 87 per cent of the Budget Estimate for this fiscal. (PTI photo)

The Indian rupee has climbed to heights seen only once before in the past decade, as measured against the currencies of the country’s trading partners. Unlike past periods of strength, it has exporters reeling.

The rupee’s real effective exchange rate (REER) – calculated on a trade-weighted basis against a basket of 36 currencies and adjusted for inflation – rose to 113.2 in March, according to the Reserve Bank of India. This year is only the second time the rupee’s REER has exceeded 112, in data going back to 2004. The other time was during a one-year stretch from September 2010 to August 2011.

During the previous period of currency strength, many other emerging currencies were also strong and export growth was stoked by robust global demand, helping to cushion the impact on exporters. This time, however, those relationships are reversed. Ministry of Commerce and Industry data shows India’s exports fell 21.1 percent year-on-year in March, the biggest drop in more than five years.

This double-whammy of dull foreign demand and a strong currency is posing a dilemma for India’s policy-makers, while exporting industries from jewellery and pharmaceuticals to commodities and IT outsourcing are feeling the pain of lower profits and weaker competitiveness. “For the first time in a decade – which includes the boom period and the bust period also – REER is moving up and exports are moving down,” said Nikhil Gupta, analyst at brokerage Nirmal Bang.

A stronger rupee erodes exporters’ profits that are earned abroad and converted back into the Indian currency. The export-oriented IT, energy, and metals and mining sectors are forecast to be three of India’s four worst-performing sectors in earnings growth over the next 12 months, Thomson Reuters StarMine data shows. And while exporters have got some relief from a 3 percent pullback in the rupee since early March to 63.59 per dollar, they still face increased competition from Europe, Japan and others with weaker currencies, in markets where they have traditionally performed well.