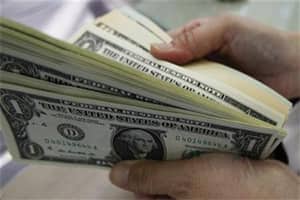 As central banks stepped up interventions to prevent their currencies from falling too sharply, global foreign exchange reserves may have fallen in the third quarter for the first time since the financial crisis.

The Reserve Bank of India has been selling dollars to prop up the rupee, which hit a 13-month low this week

$3.888 trillion: China’s forex reserves at the end of the third quarter.
The country saw a decline of $105.21 billion on the quarter despite a record quarterly trade surplus of $128 billion

Russia’s central bank conducted over $80 billion in currency interventions this year to support the ruble, which has fallen around 50 per cent versus the dollar

The real has hit 10-year lows and is down 13 per cent this year, prompting the central bank to intervene via currency swaps worth up to $200 million a day

The rand has fallen 10.5% against the dollar this year. Forex reserves have fallen slightly as its central bank tends not to intervene to support the rand

462.395billion francs: Swiss forex reserves at the end of November.

The Swiss National Bank last week repeated its pledge to buy “unlimited” quantities of foreign currency to prevent the franc from strengthening past the limit of 1.20 per euro.

The lira hit a record low this week and is down 9 per cent this year.

More Stories on
Forex Reserve
Next Story
Indian rupee trims initial gains, still up 7 paise to 63.04 vs US dollar