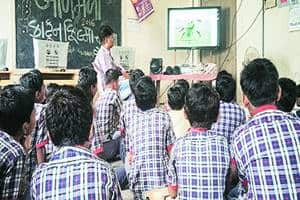 Technology and education are a great combination if used together with the right reason and vision. But the sad reality is that technology is touching only urban lives. Lack of teachers, lack of interest, poverty, gender discrimination, lack of infrastructure and old methodologies of teaching are some of the reasons which are holding back progress in rural education.

Learning Delight, a start-up in the rural education space, is trying to change this. It is leveraging modern technology to make the process of learning fun for students and teachers in rural and semi-urban areas. Starting with five schools four years back, it is currently functional in over 8,000 rural government schools spread over 11 districts of Gujarat. “The most unique feature is that it starts at the bottom of the social pyramid, targeting the rural and semi-urban areas,” says Harshal Gohil, founder, Learning Delight.

Also Read
Aim to hit $1-bn AUM in 6 months: KreditBee CEO
Banks wrote off Rs 10 lakh crore loans in last 5 years, but all is not lost, FM Sitharaman tells Parliament
Govt to take a view on PSB privatisation after consultations with ministries, regulator
Future of banking: A metaverse bank, on your browser soon

Having grown up in the small city of Bhuj in the Kutch district, Gohil always had a deep connect with rural India. While he later moved to Mumbai for higher studies, graduating with a bachelor’s degree in biotechnology from Pune and pursuing a business degree at Nirma University in Ahmedabad, memories of his early education years stuck with him. And what struck him most was the marked disparity in the quality of education between rural and urban areas. This observation is what eventually prompted him on his entrepreneurial journey. He met his friend and partner Vandan Kamdar during his MBA days, and together they established Learning Delight, with a grand vision of bringing a sense of equivalence in how students experience education, irrespective of the school they go to, in any part of the country.

“The idea behind this venture is and has always been to provide digital learning tools that can aid teachers and engage students in the rural and semi-urban areas. Simply put, we wanted to put the ‘delight’ back in the process of learning. In 2014, we were joined by Parinita my wife, as vice-president, marketing, who shared our sentiments and helped accelerate our operations,” says Gohil.

Gohil was aware of the acute differences in the way the same course curriculum was being delivered across city and village schools. “Further exploring this basic difference, when I went and spoke to rural educators to understand the challenges they face, during my MBA days, is what led to the genesis of Learning Delight. This is why we decided to make our product more region-friendly and ensured that the software was available in the regional language and could be accessed despite lack of internet connectivity.”

The Learning Delight management team believes that grades and high scores are not an accurate measure for what a student is learning. “At Learning Delight, we have incorporated alternative teaching aids such as animation, riddles, puzzles and stories that are aligned to support teachers and enhance the quality of student engagement—based on state board curriculum—making prescribed textbooks fun and easy,” he says.

What also sets Learning Delight apart, in Gohil’s opinion, is that it has a very inclusive approach to rural education. “We encourage the involvement of non-government organisations in the area. We aim to empower schools in rural areas so we don’t expect them to pay for the software. Instead, we appeal to corporate-run CSR initiatives and individuals with a focus on philanthropy, and that is where we generate revenues from.” Enterprises such as Transpek Industries, Adani Foundation, Excel Crop Care, besides some individual donors, have helped scale up the project. “This year, we have partnered with Rotary International, Rotary District 3051 and 3060 to spread the Learning Delight project further,” says Gohil.

Gohil believes that digital education is the norm for the future. “Our journey in transforming rural education in India, has only just begun,” he says, summing up the prevailing mood at his venture.