Many are hoping to persuade customers to pull out less cash and use electronic channels at least for a few days. One bank has decided to issue prepaid cards free of cost. However, pensioners will be given cash. 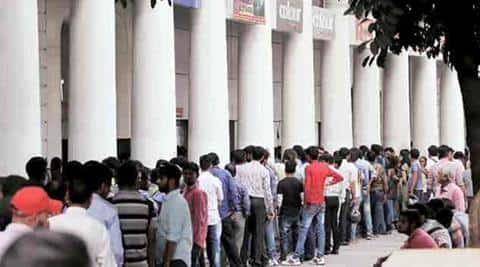 Many are hoping to persuade customers to pull out less cash and use electronic channels at least for a few days. One bank has decided to issue prepaid cards free of cost. However, pensioners will be given cash. (Source: Express Photo)

Pay day promises to be pain day for banks across the country as customers will look to take home at least part of their salaries in cash. With very little cash coming their way from the printing presses, banks are bracing for Thursday, having sought reinforcements to man additional tellers and readying to work longer hours. Many are hoping to persuade customers to pull out less cash and use electronic channels at least for a few days. One bank has decided to issue prepaid cards free of cost. However, pensioners will be given cash.

The country’s biggest lender, State Bank of India is taking all steps to ensure customers are not disappointed. Nevertheless, given how woefully short of cash banks have been, Rajnish Kumar, managing director, tried to temper expectations saying it was possible some branches might see a slight shortfall.

“Yes, arrangements are in place at all our branches,” Kumar said, confirming there would be more people manning the counters. “We will also have people to manage the crowd so that the process is an orderly one,” the managing director added. Of the bank’s 48,000 ATMs, around 39,000 have been recalibrated.

Also Read
Banks collect Rs 10,000 crore in minimum balance penalty; PSU banks earn this much
Future of money? Slow but steady, India appears to be moving towards a digital currency
Equitas SFB aiming at 25-30% credit growth in next 2 quarters
RRBs may get to adopt reforms agenda meant for larger banks

Even as they brace for pay day, banks are using the cash crunch as an opportunity to sensitise customers on digital payments. Rajeev Rishi, chairman and managing director, Central Bank of India, said the bank has appealed to several corporate customers urging them not to withdraw cash to pay employees.

“We have requested them to use prepaid cards to pay employees who do not have bank accounts,” Rishi said.

Typically, withdrawals on pay day are almost twice that on a normal day. A general manager at a large public sector bank told FE that branches where salary payments take place were being fortified with additional counters. “We will work late and educate customers about digital and mobile banking,” he said, conceding there was an acute shortage of cash. The bank, he said, sees R800-900 crore daily withdrawals during the salary and pension week.

According to the chief financial officer of a public sector lender, banks should get some cash to meet the pay day outflow. “While we have been holding back cash, we will have to see how much banks get from the Reserve Bank of India on Wednesday,” he added.

A private sector bank official said that there is inadequate supply of cash in the system and with 20% rise in withdrawals expected in the pay day week, managing the situation could be a challenge.