Borrowing through corporate bonds and commercial paper (CP) has exceeded loans disbursed by banks so far in FY16, reports Bhavik Nair in Mumbai. 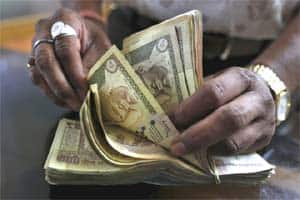 Bad loans situation worsens: As many as five public sector banks led by Bank of Baroda (BoB) on Friday reported a combined loss of Rs 6,751 crore for the three months to March 2016. (Photo: Reuters)

Borrowing through corporate bonds and commercial paper (CP) has exceeded loans disbursed by banks so far in FY16. Bank loans include those to individuals and therefore, the data suggests a whole host of companies may have stayed away from banks. Typically, banks lend more in a year than is borrowed in the bond and money markets.

However, money raised via CPs and corporate bonds have touched Rs 3.55 lakh crore thus far in FY16, which is higher than the non-food credit by banks which is approximately Rs 3.03 lakh crore. Companies have tapped the bond markets primarily because it is cheaper to borrow there. The difference in borrowing rates has been anywhere between 50-100 basis points. Shashikant Rathi, EVP, capital markets, Axis Bank, points out the shift in borrowings to the corporate bond market from the banking system has been seen across sectors.

Banks are seeing subdued demand for term loans and project finance given investment activity is sluggish.

Moreover, the sharp drop in prices of commodities and lower inflation has brought down the demand for working capital too.

Moreover, their loans are priced higher than bonds and CPs prompting companies to opt for the latter.

In 2015, banks reduced their base rates close to 60-70 basis points. For example, State Bank of India brought its base rate down to 9.70% from 10% at the beginning of the 2015. However despite this their loans remained more expensive than borrowings in the bond market since yields fell more sharply. For example, immediately after the cut in the repo rate by 50 basis points on September 29, by the central bank, short-term CP rates fell by 50-75 basis points. Primarily, companies which enjoy a rating above AA- have moved to corporate bond market since, as Rathi points out, yields here are lower by 150-200 basis points.