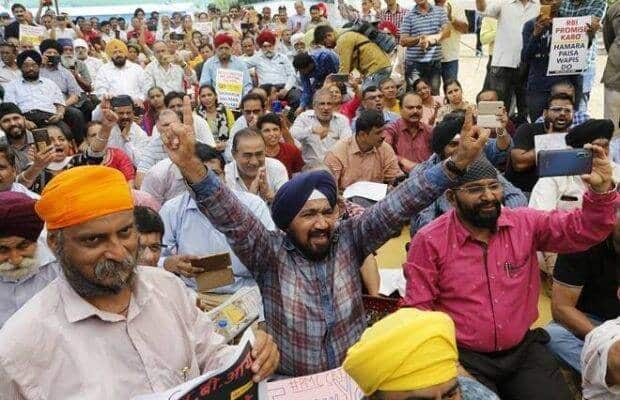 Bank officers’ union on Tuesday launched nationwide movement against proposed privatisation of stat-owned lenders. ‘Bank Bachao Desh Bachao Rally’ was held at New Delhi’s Jantar Mantar on Tuesday attended by officers and other stakeholders from various parts of the country, the All India Bank Officers’ Confederation (AIBOC) said in a statement.

Addressing the rally, AIBOC General Secretary Soumya Datta appealed to the government to withdraw the Banking Laws (Amendment) Bill, 2021, which has been listed for introduction and passing in the winter session of Parliament.
“In case the government tables and passes the bill paving the way for the privatisation of the public sector banks, the bank officers will unite all the stakeholders of the banking sector and launch a nationwide agitation,” he said, urging the bankers to draw inspiration from the farmers movement.

Finance Minister Nirmala Sitharaman while presenting Budget 2021-22 earlier this year had announced the privatisation of public sector banks (PSBs) as part of disinvestment drive to garner Rs 1.75 lakh crore. The Banking Laws (Amendment) Bill, 2021, to be introduced during the session is expected to bring down the minimum government holding in the PSBs from 51 per cent to 26 per cent.

In the last concluded session, Parliament passed a bill to allow privatisation of state-run general insurance companies. The General Insurance Business (Nationalisation) Amendment Bill, 2021, removed the requirement of the central government to hold at least 51 per cent of the equity capital in a specified insurer.

The Act, which came into force in 1972, provided for the acquisition and transfer of shares of Indian insurance companies and undertakings of other existing insurers in order to serve better the needs of the economy by securing the development of general insurance business.

Government think-tank NITI Aayog has already suggested two banks and one insurance company to Core Group of Secretaries on Disinvestment for privatisation. According to sources, Central Bank of India and Indian Overseas Bank are likely candidates for the privatisation.