Cracking down on those allegedly involved in large bank loan frauds, Enforcement Directorate (ED) today issued orders for attachment of assets worth Rs 112 crore of a Noida-based media firm in connection with its money laundering probe against it. 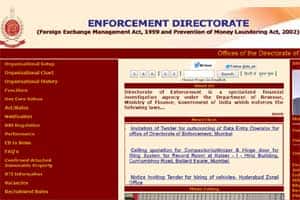 The accused can appeal against the order before the Adjudicating Authority of the said Act within 180 days time.(Source: Website)

Cracking down on those allegedly involved in large bank loan frauds, Enforcement Directorate (ED) today issued orders for attachment of assets worth Rs 112 crore of a Noida-based media firm in connection with its money laundering probe against it.

The firm, Ms Century Communication Limited, and its promoters had launched India’s first all Bhojpuri news channel in 2008.

The agency has been probing the case based on a CBI FIR against the firm registered following a complaint of alleged loan fraud by Indian Overseas Bank’s (IOB) Chennai branch in 2012.

As per the provisional attachment order issued by the agency under the criminal provisions of the Prevention of Money Laundering Act (PMLA), the firm’s plot worth over Rs 52 crore in ‘Film City’ area of Sector-16A Noida, multiple flats in a business park in Mumbai, two flats in Mumbai’s Khar area, some land assets in Tamil Nadu and a large property in the posh Maharani Bagh area of South Delhi in the name of the main promoter P K Tewari and his family members have been attached.

“The total term loan amount sanctioned was Rs 555.52 crore and as per CBI charge sheet IOB lost Rs 163.19 crore and Rs 301.65 crore was lost by other consortium of banks.

“The loans were sanctioned for the purpose of setting up new studios for post production of films at Noida, Mumbai and Chennai by submitting forged and fictitious documents with the collusion of bank officials,” the ED said in a statement.

It alleged that Tewari and his sons formed “many fictitious firms like Ms Avitel Electronics Pvt Ltd, Ms Amarjyoti Vyapaar Ltd, Ms Via Earth Private Limited, Ms Third Eye Communication, Asiatic Petroleum Company Limited and Spencer Cables Limited among others and loan amounts sanctioned to CCL were diverted to the bank accounts of these company.

“Further amounts from these companies were diverted to their (Tewaris’) personal accounts and were used for purchase of immovable properties in their personal names. Some amount was also sent abroad.”

The laundered assets worth Rs 112 crore including properties of CCL and promoters have been provisionally attached by the ED, it said.

The total value of the attached assets is Rs 111.96 crore and an attachment order under PMLA is aimed at depriving the accused from obtaining benefits of their alleged ill-gotten wealth.

The accused can appeal against the order before the Adjudicating Authority of the said Act within 180 days time.

“The investigation in the case is in progress,” it said.

The agency, in the recent past, had similarly attached assets under PMLA of companies defaulting bank loans even as it is probing the high-profile Kingfisher Airlines alleged loan fraud under the same laws.