Available in two variants – Off-road and City – the Royal Enfield Himalayan comes at a starting price of Rs 1.60 lakh (ex-showroom). 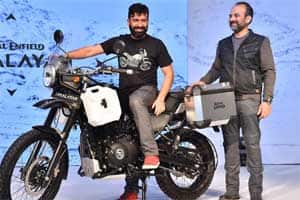 The company had sold 42,360 units in the same month last year, a company statement said

The long-wait for the first adventure tourer from Eicher Group-owned motorcycle maker – Royal Enfield Himalayan – finally came to an end today. The vehicle that had made its debut a day before the Auto Expo, was launched during an event in Mumbai at a starting price of Rs 1.55 lakh (ex-showroom, Maharashtra).

Power for the Royal Enfield Himalyan is a single-cylinder, 411cc, air-cooled engine with single overhead camshaft (SOHC) and a counter balancer. This powertrain is claimed to be the most refined Royal Enfield engine. Coupled to a 5-speed constant mesh gearbox, this engine churns 24.5bhp at 6500rpm and a peak torque of 32Nm at 4000-4500rpm.

The Royal Enfield Himalayan’s off-road version features mounts for jerry cans on either sides of the fuel tank, extended carriers and spoke wheels, though the regular version is kept devoid of the aforementioned features to make it easy to drive around city roads.

In addition to the above-mentioned features, the RE Himalayan off-road version additionally gets a height adjustable windshield, high-mounted mud flap at the front, jerry cans on both sides and mud-guard positioned right close to the tyre.