Maruti Suzuki Baleno, Ertiga to Audi Q7: All you need to know of car launches in Oct

Take a sneak peak into what is in store from Maruti Suzuki Ertiga facelift, Baleno, Chevrolet Trailblazer, Audi Q7 and more – price starts Rs 5.50 lakh and rises to Rs 75 lakh. 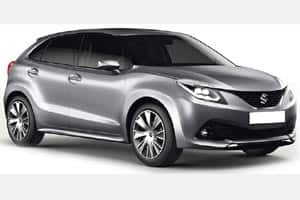 Country's largest car maker Maruti Suzuki India will launch premium hatchback Baleno next week, which will be exported to over hundred countries as a 'Made-in-India' car. (CarDekho)

September was a spectacular month for car launches and October too is going to see a number of high profile unveilings to set up the carmakers for the crucial coming festive season. So, take a sneak peak into what is in store, from Maruti Suzuki Ertiga ‘facelift’, Baleno, Chevrolet Trailblazer, Audi Q7 and more.

Maruti Suzuki Baleno
This new model from Maruti will mark the carmaker’s entry into the premium hatchback segment and the vehicle will be retailed via NEXA showrooms. On the outside, Baleno sports perforated radiator grille which is V-shaped while the side gets alloy wheels in top variants and steel rims in the base and mid variants.
Mechanically, new Baleno will work on 1.3-litre diesel engine that can produce the power output of 88bhp and peak torque of 200Nm. The premium hatch will also come with the latest SHVS technology seen in Ciaz sedan. Price of Baleno would fall somewhere around Rs 5.50 lakh. Maruti Suzuki top honchos are on record saying that the old Baleno sedan, which is now discontinued, and the new car have nothing in common.

Maruti Suzuki Ertiga Facelift
Maruti Suzuki is all set to launch the new version of the Ertiga. The original Ertiga was also working quite well in the market and managed to grab an impressive number of bookings within a couple of months of its launch. In the updated form, Maruti Ertiga will receive various cosmetic changes while the bookings for the car are already under process. Talking about the changes, it will get a bold chrome grille with three slats, while chrome treatment can be seen around the fog lamps and above the number plate as well. On the side, it will get restyled 10 spoke 15-inch alloy wheels while at the rear, it will receive new taillamp cluster and reflectors.
Under the hood, ‘facelifted’ Ertiga will be offered in both the petrol and diesel trims. The options include the 1.4 litre mill that can deliver the power output of 95 PS and maximum torque of 130Nm, while the diesel variant will house 1.3 litre engine that can produce power output of 90 PS and peak torque of 200Nm. The diesel variant will come with SHVS technology. The new Ertiga will get the expected price tag of between Rs 7-9 lakh for the various versions.

Chevrolet Trailblazer
New Trailblazer was recently spied in Jaipur in early August. The new vehicle is expected to be launched in October and will come to India via CBU route.
Under the bonnet, the bulky SUV is expected to get 2 diesel engine options for the customers to choose from. One will be the 2.5 litre Duramax engine and the second one is 2.8-liter diesel engine. Chevrolet Trailblazer would be priced around 25 lakh.

Abarth Punto Evo
Fiat is all set to introduce a slightly powerful model of Punto in India which is named  Abarth Punto Evo. On the outside, the vehicle will get signature radiator grille with the company’s logo placed at the center. While on the side profile, vehicle will get a neatly crafted arches and new set of 16-inch scorpion sting alloy wheels.
What is worth mentioning is the powerhouse underneath. The Abarth Punto Evo will get the 1.4 litre engine shared from Linea, that has the ability to produce the power output of 145bhp. It would be getting a price tag of around Rs. 8.5 lakh.

Audi Q7
Last but not the least is a strong contender from German luxury brand Audi. The carmaker is set to roll out its all new Audi Q7 in the market. The new vehicle is performance oriented and comes with a 3.0 litre V6 engine that can generate power output of 272 bhp and yields a peak torque of 600 Nm. The car will come mated to 8-speed manual transmission system, while it will also feature Audi’s Quattro AWD system. New Audi Q7 will be priced around Rs 75 lakh.