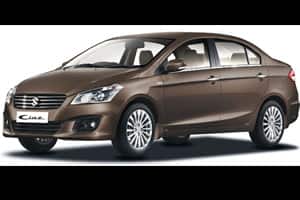 Maruti Suzuki has addressed the hype and suspense surrounding the brand new sedan – the Ciaz. The car is a replacement for the outgoing Maruti Suzuki SX4, which was pretty popular in its own right. Famous for the quote “Men are back”, the SX4 was already an amazing car but couldn’t mark its success in the market. It was a difficult job for Maruti Suzuki, but it has done wowed the enthusiasts with its prettier and sportier looking Ciaz – this mid size sedan is expected to rock its segment.

The Ciaz brings to the table a very modern and beautiful looking design language that is aggressive from every angle. The front grille is large and the tail lamps on the back end are huge and reminiscent of a style commonly found on the rear end of BMWs and other high-end luxury car manufacturers. The car is sleek and has tremendous road presence. The sides are pretty too, with a strong character line and impressive aerodynamic looking panels and sleekness.

The Ciaz is a great addition to Maruti Suzuki’s line-up and definitely looks as stunning as it needs to look to compete with the others in the segment. Among these are the likes of Honda City, Ford Fiesta, and Hyundai Verna Fluidic. The most severe competition however, will be with the Honda City. The City’s sales have jumped ever since the diesel version of the same came out, with the i-Dtech engine that pushes the boundaries of both power and fuel economy.

Even Ford has stepped up the game by including the Fiesta, after a face-lift, in the segment with its main feature being the relatively low price tag and stunning looks. Nissan too are in the picture, with Sunny, also after a face lift,  that is loaded with tons of goodies that will get your heart racing, with it’s special feature being the sheer spaciousness inside the cabin.