Automaker Mahindra & Mahindra today reported a 12.44 per cent decline in total sales at 45,212 units in March. 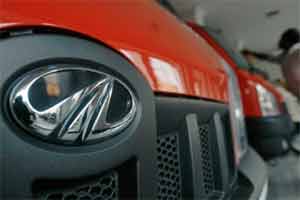 After the launch of Jeeto, M&M’s market share has more than doubled to 30% during the July-September period from just 12% during the April-June quarter. (Reuters)

Automaker Mahindra & Mahindra today reported a 12.44 per cent decline in total sales at 45,212 units in March.

It had sold 51,636 units in the same month last year, the company said in a statement today.

Four-wheeler commercial vehicle sales were down by 19 per cent to 14,279 units last month against 17,649 units in year-ago period, M&M said.

Commenting on the outlook, M&M Chief Executive (Automotive Division) Pravin Shah said: “With factors such as expectation of normal monsoon, settling down of petrol and diesel prices and the likely softening of interest rates, we expect the auto industry to perform better in FY2016.”

As a lead indicator, the company has already seen the impact in segments such as heavy commercial vehicles, which is on the recovery path, Shah added.