The Jaguar E-type is considered a classic among cars designed and produced in the world ever. 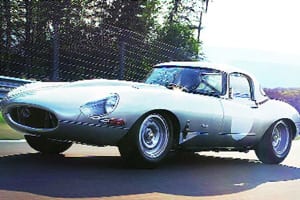 Tata Sons chairman Cyrus Mistry has sought the government’s permission to import an E-type Jaguar of 1971 vintage, which was famously described by Enzo Ferrari, the founder of the eponymous Italian sports car manufacturer as “the most beautiful car ever made”.

The permission has been sought from the Director General of Foreign Trade (DGFT) because, as per the import policy, a second-hand or used vehicle can be imported only against authorisation.

Further, the import of such vehicles is subject to the condition that it “shall not be older than three years from the date of manufacture; have right hand steering, and controls (applicable on vehicles other than two and three wheelers); have a speedometer indicating the speed in kilometres”.

It is in view of this that the permission has been sought, a Tata Group spokesperson explained.

“A response to the application is awaited… All procedural requirements will be complied with and all the necessary charges and duties will be paid,” the spokesperson added.

Currently, import of vehicles by foreign diplomats and others belonging to this category exempt from payment of customs duty.

However, private citizens and other individuals have to pay a duty of over 100 per cent for importing a used vehicle.

When the Tata Group had bought the marquee Jaguar Land Rover brand in 2008 from Ford Motor, the move was questioned by industry experts.

However, as Mukund Rajan, a member of the Group Executive Council at Tata Sons, said last year, “At the time, it was seen as a dodgy investment. It is interesting how things have turned out very differently… We think JLR has been a very happy convergence… it has really worked out well.”

In May, Jaguar Land Rover Heritage Business had announced that it will build six brand new ‘lightweight’ E-types from the intended 18-car series.

According to the announcement, “The all-aluminium cars will be assigned the six remaining chassis numbers which were originally allocated in 1963. All six vehicles will be built as perfect reproductions and to the exact specifications of the original 12 cars first produced in 1963….

“Only 12 of the aluminium bodied Lightweight E-types were eventually built, the last in 1964, the remaining six designated chassis numbers having lain dormant, until now.”

DGFT to take a call

* The permission has been sought from the Director General of Foreign Trade because, as per the import policy, a second-hand vehicle can be imported only against authorisation

* Currently, import of vehicles by foreign diplomats and other privileged persons in this category are exempt from payment of customs duty