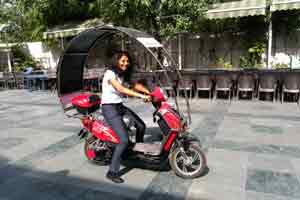 Keeping in mind the future of transportation, ETI Dynamics has unveiled its prototype ‘solar-electric hybrid’ scooter priced at Rs 50,000, at Press Club of India in New Delhi.

The prototype scooter, which runs with ‘zero-noise’, has a canopy of bendable solar panel that helps it charge on the go. The vehicle can also be charged with the electricity. So, we can say that it is an electric scooter with addition of solar charging facility.

Once completely charged, the hybrid covers more than 50 km at maximum speed of 45km/h, claims the company.

Rajneesh Wadhwa, Chief operating Officer (COO) of ETI Dynamics said that the electric vehicle market is yet to take off in India and an entire ecosystem is needed for that. “The electric vehicle market hasn’t yet taken off in India due to high costs and lack of charging infrastructure. Due to this, the technology is restricted to very few platforms like car and e-rickshaws. We need the entire eco-system to come up simultaneously. For the success of electric mobility, we need large number of vehicles as well as elaborate charging stations network.”

Wadhwa also said that ETI Dynamics is planning to implement the concept in auto-rickshaws, buses and golf-carts.

Though the company is not setting up any manufacturing plant in India, CEO of the firm, Sanmit Ahuja said that it is looking to come up with assembling units in collaboration with a range of the vehicle manufacturers and engineering institutions and the prototype will hit the road in early 2016.

“The company will initiate pilots in 5-6 cities across India including Delhi and Bangalore. The first batch of the vehicles is expected between January to March, 2016. We are also in process to create mobile phone application to help consumers locate charging stations, monitor battery performance and status and make payments,” added Ahuja.

The firm also announced its collaboration with the Digit Group of USA and Sunon Energy of India, partnering in with etiDyanmics to change the electric mobility landscape in urban areas of the country.